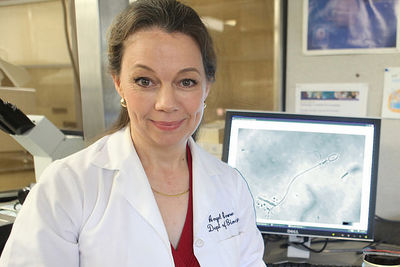 Angel Anne Yanagihara, Ph.D. is a world-renowned biochemist, a Fulbright Specialist, and the Director, Pacific Cnidaria Research Lab and researcher at the Békésy Laboratory of Neurobiology in the Pacific Biosciences Research Center in Honolulu, Hawaii. Her work on jellyfish and their stings and venom was the subject of a NOVA documentary. She was a technical advisor on Diana Nyad's fourth attempt to swim from Cuba to Florida as well as her fifth attempt across the Straits of Florida that turned out to be successful.

She is also creator of a box jellyfish skin ointment called Sting No More. The commercialized product is used by selective military special forces as a means to prevent the harmful effects of venomous jellyfish stings. Sting No More is manufactured and marketed by Alatalab Solutions, LLC.

Dr. Yanagihara's research program is the systematic biochemical characterization of cubozoan venom. The current focus is on the Hawaiian box jelly Carybdea alata. Close cousins of this Box jellyfish (cubozoan) are the Australian carybdeids that can cause Irukandji syndrome and the lethal chirodropid, the Australian Box jellyfish Chironex fleckeri.

Sting No More™ by Dr. Angel Yanagihara
Sting No More™ is an over-the-counter cosmetic-category brand that includes jellyfish relief cream that used to protect against the venom by the box jellyfish. Developed by Dr. Angel Yanagihara who specializes in venom research, the pharmaceutical preparations are specifically designed for ocean swimmers, professional divers, military personnel and clinical applications used by health care professionals. For the state-of-the-art research results in the prevention of specific inhibitors of dangerous venom toxins, for the greatly appreciated treatment for envenomation sequelae, and for its scientifically-sound approach that can withstand any peer review, Sting No More™ is a worthy nominee for the World Open Water Swimming Offering of the Year.