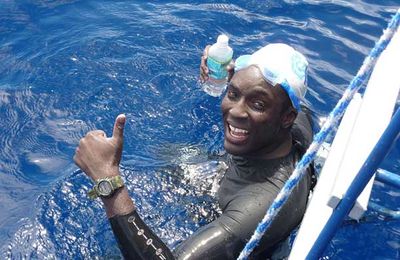 Andy Akinwolere (born 30 November 1982 in Nigeria) is a British television presenter and an open water swimmer.

Akinwolere was born in Nigeria in 1982, and moved to the United Kingdom with his family when he was eight years old. They settled in Birmingham where he was educated.

Akinwolere attended St. Thomas Aquinas Catholic School, in Kings Norton, a suburb of Birmingham, and at Sheffield Hallam University, from which he graduated in 2004, with a BA (Hons) degree in Media Studies

His first job was as a 'runner' for the BBC. He was asked to audition by one of the Blue Peter directors he met whilst eating out with work colleagues; he had previously intended to go into documentary-making and radio. Akinwolere began co-presenting the BBC television program Blue Peter on 28 June 2006. He is now a senior presenter and was nominated for the prestigious Presenter of the Year Children’s British Academy Film Awards|BAFTA]] and subsequently nominated with Blue Peter the following year for Best Factual Programme.

His first challenge, as a presenter, was to complete a 150 metre abseil and a 1100 ft Hele Bungee jumping. As a presenter he has had great experience from guest presenting on CBBC’s Safari 8 to the established art show SM:ART. Andy most recently presented the BBC red button coverage of the London Mini-Marathon. Akinwolere also co-presented a show held in front of a 3,000 strong crowd, and hosted Queen Elizabeth II to celebrate 50 years of Blue Peter, the most established children’s programme in the country. He is currently working on programme ideas with BBC Switch and BBC 2

On 25 April 2011, Akinwolere was a contestant on Total Wipeout 2nd Celebrity Special of Series 4 but had to quit in The Wipeout Zone because he hurt himself on Killer Surf. He came 2nd in The Qualifier and Crash Mountain and came 1st in both Dizzy Dummies rounds.

Akinwolere has four siblings - three brothers and one sister who live in the United States of America - and speaks Yoruba language in addition to English language. His mother and father both lived abroad for a while and he spent a small part of his childhood living in Nancy, France. He has been quoted as saying he has seen 118 different cities around the world. He mentioned on Blue Peter on 8 April 2009 that he shares a flat with CBBC presenter Johny Pitts. He is an amateur photographer and has had pictures published in National Geographic Kids Magazine and the 2010 Christmas edition of Vogue Bambini. He is also a keen collector of rare Gramaphone record and rare music.

Blue Peter presenter Akinwolere has set a record for swimming over the greatest depth in the ocean. Akinwolere swam 8.6 km miles across the Palau Trench, an 8,000-metre deep abyss in the Pacific Ocean, one of the deepest stretches of water on the planet. He was the first person to swim across the deepest part of the trench to set the record for the deepest location for an open water swim. His record was verified by the World Open Water Swimming Association. Until a few weeks before the record attempt, Akinwolere was unable to swim a length in a pool and was terrified of the open water.

He said: "It's an absolute triumph to have completed this swim, after having had just over 10 weeks of swimming training I still cannot believe how far I've come. I could not swim a length before this and now I have swum over one of the deepest parts of the world. All the hours of gruelling training will be worth it if my challenge inspires more children from ethnic minorities to learn to swim."