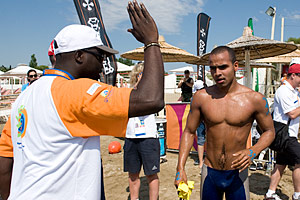 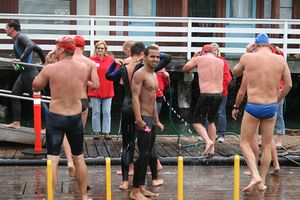 Andrew Smiley is a pool and open water swimmer from the Cayman Islands who was selected in a global online poll as the recipient of the 2009 World Open Water Swimming Performance of the Year Award. He is a member of the Para Five.

Out of 9,144 votes cast by fans around the globe, 2,086 individuals voted for Smiley, slightly edging out the 2,004 voted cast for the Camlough Team of Ireland.

During that year, Smiley placed 106th in a field of 800 swimmers in the RCP Tiburon Mile where the Special Olympics athlete also placed third in the 19-29 age in the non-wetsuit division in the San Francisco Bay in his first ever cold-water experience.

Special Olympics CEO and Chairman Tim Shriver said on behalf of Smiley, "Far too often, our athletes, athletes with intellectual disabilities, are viewed for what they can't do. But Andrew is showing the world what he can do and we congratulate his effort for being selected as the Greatest Open Water Swim of 2009. Andrew's performance in the RCP Tiburon Mile is just one example of how Special Olympics athletes are accomplishing great things that many just dream to achieve."

Every year, hundreds of thousands of individuals of every age, ability, background attempt and complete open water swims in every conceivable body of water around the world. Every year is no different - and no swims could have been possible without the tremendous help of escort boat pilots and the watchful eyes of the swimmers' support crews, kayakers, race organizers and safety volunteers.