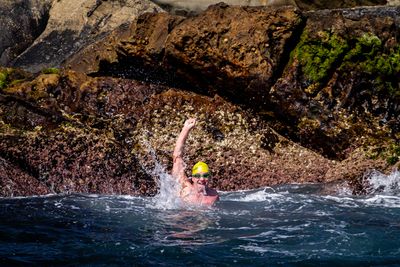 André Wiersig completing a 14.4 km crossing of the Strait of Gibraltar from Spain to Morocco and achieving the Oceans Seven. Photo courtesy of Dennis Daletzki 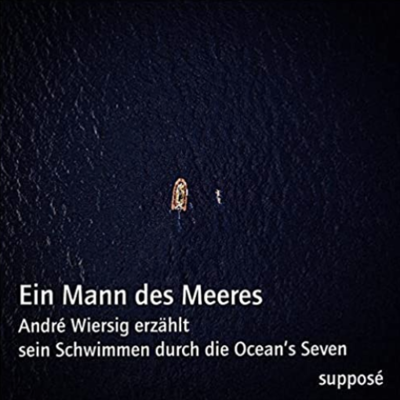 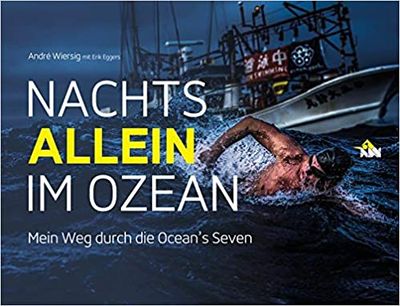 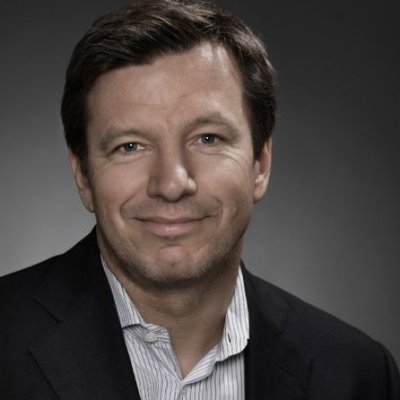 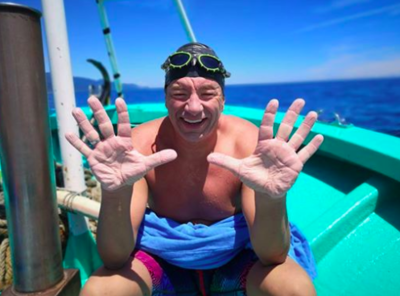 André Wiersig after completing the Tsugaru Channel in Japan

André Wiersig is a 49-year-old German open water swimmer, Hawaiian Ironman triathlete, marathon runner, and ice swimmer from Paderborn, Hamburg. He completed the Oceans Seven on 9 June 2019 and is a member of the International Ice Swimming Association.

Wiersig was nominated for the 2020 WOWSA Awards in the World Open Water Swimming Man of the Year category with the following nomination: André Wiersig has followed up his Oceans Seven achievement with all kinds of positive dryland activities. After encountering dolphins, whales, sea lions and jellyfish in his channel swims, Wiersig became an ambassador for the German Ocean Foundation. His mission is to teach life lessons to others, including how to live an adventurous, eco-friendly life. After his Oceans Seven success, he co-created the beautiful hardcover book with incredible photography (called Nachts Allein Im Ozean, Mein Weg durch die Ocean's Seven or Alone in the Ocean at Night, My Way through the Ocean's Seven) together with Erik Eggers and Dennis Daletzki. He also co-produced the audio CD Ein Mann des Meeres: André Wiersig erzählt sein Schwimmen durch die Ocean's Seven (or A Man of the Sea: André Wiersig Tells of his Swimming through the Ocean's Seven) with Erik Eggers and Klaus Sander. For helping to motivate and inspire others as a German icon of extreme stamina, for serving as an ocean advocate, and for leveraging his Oceans Seven success via a book, public speeches, television appearances, and a CD, André Wiersig of Germany is a worthy nominee for the 2020 World Open Water Swimming Man of the Year.

Wiersig was nominated for the 2019 WOWSA Awards in the World Open Water Swimming Man of the Year category with the following nomination: André Wiersig is a Hawaiian Ironman triathlete, marathon runner and ocean advocate who became the first Oceans Seven swimmer from Germany. He completed the Oceans Seven after a steady six-year journey around the world including an 18 hour 26 minute turbulent crossing of the Molokai Channel and a swift 9 hour 44 minute crossing of the English Channel. His approach to taking on the seven channel challenges is brutally refreshing and pragmatic; he takes the lessons learned from facing currents, waves, jellyfish and sharks, and applies this tough and flexible mindset to his professional IT work and everyday activities on dryland that includes serving as an ambassador for the German Ocean Foundation and working towards reducing plastic pollution in the oceans. He teaches others valuable life lessons and shares his concepts of how to live an adventurous, eco-friendly life amid all the comforts in the modern world. For transitioning from a bicycle and running shoes to become a powerful channel swimmer, for his inspirational messages about the marine environment that he shares with his colleagues, fans and younger generations, for being a personable, knowledgeable ambassador of the sport and the Oceans Seven, André Wiersig of Germany is a worthy nominee for the 2019 World Open Water Swimming Man of the Year.

On 9 June 2019, he completed a 14.4 km crossing of the Strait of Gibraltar in 4 hours 17 minutes, swimming between Spain and Morocco. Video produced by Dennis Daletzki.

On 11 July 2018, he completed a 19.5 km crossing of the Tsugaru Channel from Honshu to Hokkaido in northern Japan in 12 hours 55 minutes.