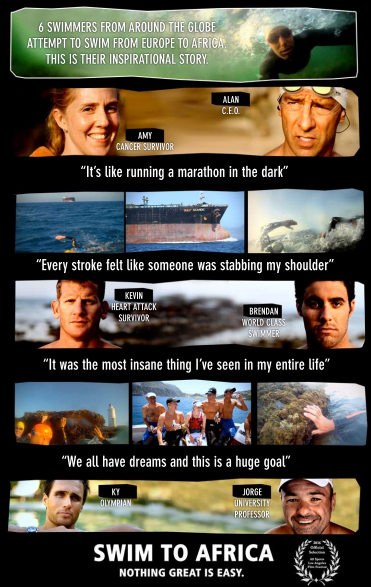 Swim To Africa, a documentary film about a crossing of the Strait of Gibraltar with Kevin Owens, Brendan Capell, Ky Hurst, Alan Morelli, Jorge Balbas, and Amy Aukstralnis

Amy Aukstralnis is an American open water swimmer who appears in Swim To Africa. The cancer survivor completed a crossing of the Strait of Gibraltar from Spain to Morocco.

Swim To Africa is a documentary film, directed and produced by Brett Drogmund and Howard Hanna of Skyscraper Productions about six swimmers from around the globe attempt to swim from Europe to Africa. A world champion open water swimmer, a CEO, a cancer patient, a heart attack survivor, an Olympic athlete, and a college professor whose lifelong dream has always been to swim the Strait of Gibraltar. Jet-lagged, exhausted and somewhat underprepared, we follow the stories of these swimmers as they battle the freezing elements across two continents. Dodging huge shipping tankers while trying to reach unfriendly Moroccan border agents is just the beginning. This mental and physical "marathon in the dark" will test everyone with surprising results.