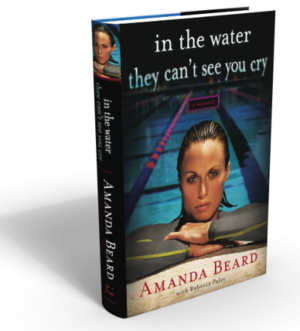 Amanda Ray Beard (born 29 October 1981) is an American 7-time Olympic swimmer who earned two gold, four silver and one bronze medal over 3 Olympic Games. She is a former world record holder in the 200-meter breaststroke and was named the American Swimmer of the Year Award twice. She has won a total of twenty-one medals in major international competition: 5 gold, 13 silver, and 3 bronze spanning the Olympics, the World Championships, the Pan Pacific Championships, and the Summer Universiade. She was inducted as an Honor Swimmer in the International Swimming Hall of Fame, Class of 2018.

Beard made her first Olympic appearance at the 1996 Atlanta Olympics at the age of 14 when she became the second-youngest Olympic medalist in American swimming history when she won 3 medals in Atlanta (1 gold and 2 silver).

Beard attended the University of Arizona where she won an individual NCAA Division I championship in 2001. In 2003, she became the world champion and American record holder in the 200-meter breaststroke.

At the 2008 US Olympic Swim Trials, Beard finished second in the 200 meter breaststroke event, and she qualified for her fourth consecutive Olympics. Beard, together with Dara Torres and Natalie Coughlin, were elected co-captains of the US Olympic women’s swimming team. However, Beard failed to reach the semifinals in the 200 meter breaststroke, placing 18th in the preliminaries.

Beard came out of retirement to compete at the 2010 Conoco Phillips USA Swimming National Championships. She finished second in the 200 breast finals at 2:26.50, qualifying her for the Pan Pacific Swimming Championships where she finished 5th in both the 100m and 200m breaststroke events.

She has appeared in FHM, the 2006 Sports Illustrated Swimsuit Edition, and the July 2007 issue of Playboy magazine, in which she posed nude.

She is a spokeswoman for Defenders of Wildlife, and enjoys interior decorating. Both of her sisters, Leah and Taryn, are swimmers. She also placed eighth in the Toyota Grand Prix of Long Beach Celebrity car race in 2006. In November 2007, Beard made her first television commercial for GoDaddy entitled "Shock". It featured her "flashing" the seven Olympic medals she won from 1996–2004. In April 2008, she joined Fox Network's popular sports talk program, The Best Damn Sports Show Period as a correspondent, covering major sporting events. In 2008, Beard participated in an anti-fur campaign for the organization People for the Ethical Treatment of Animals (PETA).

Beard wrote a book, In The Water They Can't See You Cry, in which she describes her path from the top of a sports and modeling career, through depression and rebirth through her marriage.