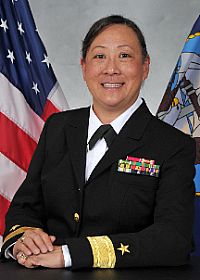 Rear Admiral Alma M. Grocki (née Lau) is the Deputy Chief of Staff for Fleet Maintenance, Commander, U.S. Pacific Fleet. She was born and raised in Honolulu. She was the first woman from Hawaii appointed to the United States Naval Academy, graduating in 1981 with a Bachelor of Science degree. Her first assignment was to Portsmouth Naval Shipyard as a Non-nuclear Ship Superintendent for USS Tullibee (SSN 597) and Submarine NR-1. During this time, she also completed her Master of Science degree in Mechanical Engineering at the University of New Hampshire.

In her civilian career, she has worked for CACI Dynamic Systems, Inc. as a Deputy Program Manager for shipyard training projects, a member of the NAVSEA Dry Dock Audit team and a senior engineer assisting Fleet Maintenance Information Technology programs. She also serves as a volunteer Blue & Gold officer (BGO) for the U.S. Naval Academy, and the BGO Area Coordinator (AC) for Hawaii and the Western Pacific, assisting high school students, Fleet Marines, and Sailors applying for admission.

She graduated from Punahou School in 1977 and was the first women from Hawaii to go to US Naval Academy, Class of 1981, 32nd company.