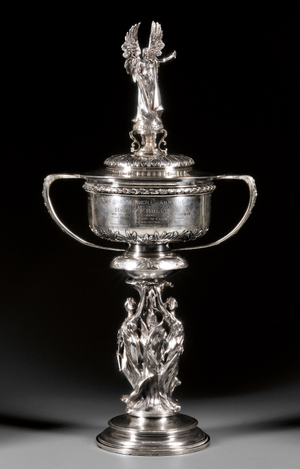 The Alexander Channel Cup was presented to Henry Sullivan for his triumphant crossing of the English Channel on his seventh attempt in 1923 in 26 hours 50 minutes which remains the second longest one-way channel swim on record. He is reported to have made six other English Channel attempts between 1913 and 1921, but all were unsuccessful. In 1927 he successfully crossed the Catalina Channel in 22 hours and 45 minutes.

The Alexander Channel Cup was auctioned off for US$20,000 by Skinner Auctioneers & Appraisers in 2011.

Monumental and Historic George V Silver Presentation Trophy, "The Alexander Channel Cup," Birmingham, 1910, Elkington & Co., makers, the cover with finial formed as winged Victory in classical garb holding a staff and standing atop a demilune platform with anthemion molded border and four S-scrolled legs, on a domed top with elongated leaftips and berrying twigs; the cup with a band of husks and leaves and extensively inscribed The Alexander Channel Cup Presented To Henry F. Sullivan. Who Swam the English Channel, Aug. 5th & 6th 1923. From Dover, England to Calais, France. Establishing World's Endurance Record. World's Breast Stroke Record. 26 Hours 50 Minutes, on stem sculpted with two classical maidens, one holding a Trident, the other a caduceus, on a circular stepped foot, with maker's inscription along rim, ht. 37 3/4 in., approx. 373.4 troy oz.

Introduction of Henry Sullivan by the Skinner Auctioneers & Appraisers[edit]

A celebrated endurance swimmer in the early years of the 20th century, Henry F. Sullivan was the first American to swim across the English Channel, and the third overall. During the course of this historic swim, Sullivan broke the world swimming endurance record, along with the world breast stroke record. Discussing a film chronicling Sullivan's Channel crossing, the London Daily Sketch on October 3, 1923, stated, "The film of Henry F. Sullivan's swim is the most interesting film we have ever seen, showing all details of this plucky American in "THE GREATEST FEAT OF ENDURANCE OF ALL TIME," swimming from England to France in 26 hours and 50 minutes, in a sea almost unfit for boats." It was Sullivan's seventh attempt. After the swim, Sullivan met the Prince of Wales, and toured Britain, then returned home where he triumphantly traveled the United States as a sporting hero for four years.

Sullivan did not confine his feats to Europe. His accomplishments include swimming from Nantasket Beach across the Massachusetts Bay to Provincetown, from Middle Ground Light, New York across the Long Island Sound to Bridgeport, Connecticut, and the Catalina Channel and Golden Gate in San Francisco, and also defending his numerous titles of aquatic achievements.

A native of Lowell, Massachusetts, Sullivan's first swimming race was won in that city's Long Pond when he was 13. After his sporting career wound down, Sullivan ran a successful business in his home state of Massachusetts. This magnificent trophy is a masterpiece of silversmithing, and an historic relic of the golden era of adventure, exploration, and sporting first achievements.