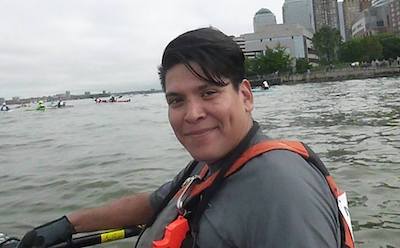 Alex Arévalo is one of the three principals of New York Open Water, the organizers of the 20 Bridges Circumnavigation Swim of Manhattan is a 28.5-mile (45.8 km) circumnavigation swim around Manhattan Island in New York and the world's longest competitive marathon swim, the 8 Bridges Hudson River Swim. He appeared in the month of June in the 2019 Marathon Swimmers Federation photo calendar.

New York Open Water has rapidly stamped and shared its vision on the marathon swimming world. The event management entity has taken the energy and opportunities of the defunct NYC Swim to a new level. David Barra, Rondi Davies and Alex Arévalo built upon the Manhattan Island Marathon Swim and other established swims around New York City – and extended and strengthened the opportunities to swim around, in and near the Big Apple. From the nearly impossibly long 91.8 km 40 Bridges Double Manhattan Island Swim to the most definitely long 194 km 8 Bridges Hudson River Swim, the passionate trio has built a solid foundation of races for the world’s most extreme marathon swimmers. For reviving and expanding the Manhattan Island Marathon Swim as the 20 Bridges event, for creating and hosting the longest solo marathon swims and stage swims in the world, for attracting swimmers from around the world to New York, New York Open Water is a worthy nominee for the 2016 World Open Water Swimming Offering of the Year.