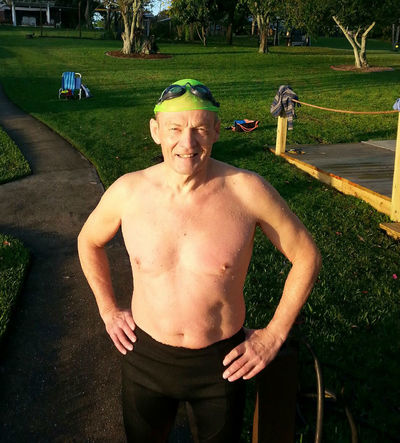 The Menai Strait (Welsh: Afon Menai) is a narrow stretch of shallow tidal water about 25 km (16 miles) long, which separates the island of Anglesey from the mainland of Wales.

The strait varies in width from 400 metres (1,300 ft) from Fort Belan to Abermenai Point to 1,100 metres (3,600 ft) from Traeth Gwyllt to Caernarfon Castle. The differential tides at the two ends of the strait cause very strong currents to flow in both directions through the strait at different times, creating dangerous conditions.

The Menai Strait Swim is an open water swim across the Menai Strait from Anglesey to Caernarfon in Wales. The Menai Strait Swim was first held in 1955 and continued for a few years before it was stopped. After a brief revival in the 1980s, it was brought to life again in 1999 by the Arfon Masters Swimming Club. It has been held every year since, celebrating its 50th anniversary in 2005.