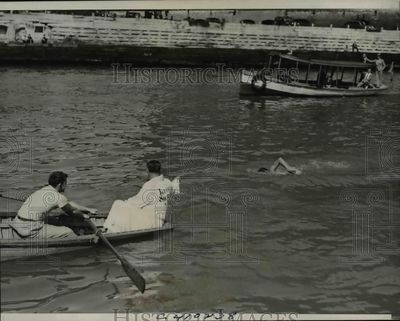 19-year-old Adolph Kiefer, named the Father of American Swimming by USA Swimming in 2013, is shown in the 2.25-mile Chicago River Marathon Swim on 12 September 1937 in 47 minutes 51 seconds 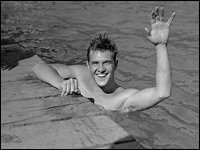 17 year old Kiefer represented the United States at the 1936 Berlin Olympics winning the gold medal in the men's 100-meter backstroke. He set new Olympic records in the first-round heats (1:06.9), the second-round heats (1:06.8) and the event final (1:05.9). He returned home a national hero, and began traveling with other U.S. Olympic medalists on a tour of Europe, China, Japan, and South America, during which he challenged other great swimmers in those locations to individual races.

In over 2,000 races, Kiefer lost only twice. At the National AAU swimming championship in April 1943, University of Michigan All-American swimmer Harry Holiday, Jr. finally went head-to-head with world-record holder Kiefer. Holiday beat him in the 150-yard backstroke at the AAU meet. The defeat was the first for Kiefer in eight years.

He joined the U.S. Navy as a chief petty officer in 1944. When the Navy realized that it was losing more lives to drowning than to enemy bullets, Kiefer was appointed to a committee to set new guidelines for safety and training. He quickly moved through the ranks, becoming Officer in Charge of Swimming for the entire U.S. Navy, training over 13,000 navy swim instructors. By the war's end, he reached the rank of lieutenant.

In 1947, he established Adolph Kiefer & Associates, Inc. in Chicago, which has provided swimmers with training, safety and competition equipment. His company was responsible for the development of the nylon tank suit in 1948 and debuted the first nylon swimsuit supplied to the U.S. Olympic Swim Team—a marked improvement over the wool suits and cotton suits available at the time. In 1966 he patented the first design for a no-wave, non-turbulence racing lane and holds 13 additional issues U.S. patents.

Kiefer subsequently devoted himself to community service, combining swimming and philanthropy in innovative ways. In the 1960s he worked with Mayor Richard J. Daley to build swimming-pools across the inner city of Chicago, providing the facilities needed for thousands of children to learn to swim. Kiefer actively supported Swim Across America well into his 70's and 80's.