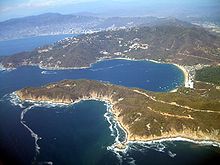 Acapulco (officially known as Acapulco de Juárez) Bay is in the city of Acapulco, a major sea port in the state of Guerrero on the Pacific coast of Mexico, 300 kilometers (190 mi) southwest from Mexico City. It is part of the Mexican Riviera and holds a number of open water swims.

There are a number of beaches in the Acapulco Bay and the immediate coastline. In the bay proper there are the La Angosta (in the Quebrada), Caleta, Caletilla, Dominguillo, Tlacopanocha, Hornos, Hornitos, Honda, Tamarindo, Condesa, Guitarrón, Icacos, Playuela, Playuelilla and Playa del Secreto. In the adjoining, smaller Bay of Puerto Marqués there is Pichilingue, Las Brisas, and Playa Roqueta. Facing open ocean just northwest of the bays is Pie de la Cuesta and southeast are Playa Revolcadero, Playa Aeromar, Playa Encantada and Barra Vieja. Two lagoons are in the area, Coyuca to the northwest of Acapulco Bay and Tres Palos to the southeast. Both lagoons have mangroves and offer boat tours. Tres Palos also has sea turtle nesting areas which are protected.

It is site of the Acapulco 5k International Swim and is best known as one of Mexico’s oldest and most well-known beach resorts, which came into prominence by the 1950s as a getaway for Hollywood stars and millionaires. Acapulco is still famous for its nightlife and still attracts many vacationers, although most are now from Mexico itself. The resort area is divided into two: The north end of the bay is the “traditional” area, where the famous in the mid 20th century vacationed and the south end is dominated by newer luxury high rise hotels.

Acapulco Bay is a deep, semi-circular bay that has been a port since the early colonial period of Mexico’s history. It is a port of call for shipping and cruising lines running between Panama and San Francisco, California, United States.

The name "Acapulco" comes from Nahuatl language Aca-pōl-co, and means "At the big reeds" or “At the broken reeds.” “de Juárez” was added to the official name in 1885 to honor Benito Juárez, the former president of Mexico. The seal for the city shows broken reeds or cane.