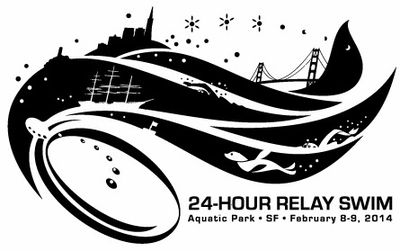 The 24 Hour Swim Relay in SF (24 Hour Swim Relay in San Francisco) is a 4-person non-stop open water swimming relay held in Aquatic Park in San Francisco, California on 8-9 February 2014 organized by Suzie Dods. It was nominated for the 2014 WOWSA Awards' World Open Water Swimming Offering of the Year and was inspired by the 24 Heures La Tuque 2-person relay sanctioned by the World Professional Marathon Swimming Federation of the 1970s.

The 2015 event will be held between 6-8 February 2015 and hosted by the Dolphin Club at San Francisco's Aquatic Park.

There is a limit of 75 total swimmers.

One loop around the Aquatic Park course is 0.75 miles.

Each relay team has a minimum of 4 open water swimmers and may include one swimmer with a wetsuit. When not swimming on an individual leg, the swimmers can rest, sleep and recover at the South End Rowing Club.

The 24 Hour Swim Relay is nominated for the 2014 World Open Water Swimming Performance of the Year.

"Swimming all day and all night is profoundly mystical. Swimming in California’s Aquatic Park is wonderfully magical. The famous Canadian relay, the 24 Heures La Tuque in Québec, is simply iconic. Visionary Suzie Dods brings the otherworldliness, the magic, and the iconic history of a 24 Hour Swim to motivated swimmers of all abilities and speeds. Within the view of the San Francisco skyline and the Golden Gate Bridge, swimmers of various backgrounds come together in celebration of marathon swimming in a cool mid-winter swim. The camaraderie, the passion, and the courage of aquatic adventurers at the 24 Hour Swim are profoundly appreciated and thoroughly enjoyed by all its participants and volunteers. For her creative vision, for her organizational and decision-making skills, for her tenacity and grit to see the event through to completion, Suzie Dods’s 24 Hour Swim is a worthy nominee for the 2014 World Open Water Swimming Offering of the Year."