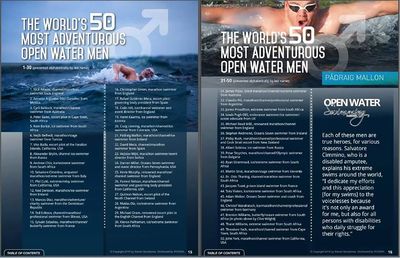 noun - The 2015 World's 50 Most Adventurous Open Water Men is a list of audacious men who have performed courageously well in open bodies of water as published by World Open Water Swimming Association.

The 2015 list includes contemporary aquatic adventurers as well as men who are close to retirement or retired. The list does not include men who no longer around (e.g., Captain Matthew Webb), but it focuses on men who have done unprecedented open water swims of note or a significant number of risk-inherent channel, lake or marathon swims, men who proven themselves in both high-level competitions and solo swims, and men who have safely guided many channel or marathon swimmers of all abilities in rough waters, with emphasis on men who have repeatedly swum in waters that are colder, rougher and longer than the English Channel: