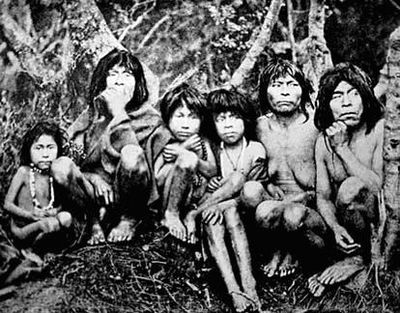 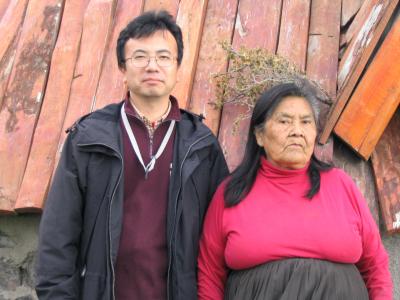 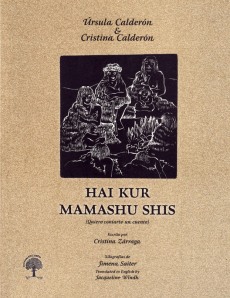 Book on the Yaghan People

The Yaghan were the southernmost indigenous people in the world. Their territory comprised of the canals and fiords of southern Patagonia: from Tierra del Fuego to Cape Horn. Their population was decimated after the arrival of the Europeans. They were a small people, seldom over 5 feet tall, with small hands and feet. Their speech was musical and soft, and their language made up of very complicated words, inflections and tones which would totally alter the meaning of the original word or phrase. They communicated over the distances with smoke signals which spoke a clear code in the smoke.

In this cold area of the world, the Yaghan did not use clothes. They covered their bodies with grease from the sea animals they caught.

Extended families lived together as often as the food supply would allow. All relatives, including the most distant of cousins, were welcome in these communities. Shelters were built by digging very large holes in the earth, placing a fire pit in the center for warmth, and surrounding the pit with whatever materials could be found that would serve as a windbreak. The diet of the Yaghan consisted primarily of shellfish supplemented with fish and larger animals of the sea such as seals and porpoises, along with sea birds which nested in the rocks. When a beached whale was discovered, smoke signals were immediately sent up to announce the finding of this storehouse of food, skin, oil and grease.

The Yaghan women dove into the icy waters to retrieve the shellfish for Yaghan men never learned to swim. They fished in fragile and delicate canoes made of the bark of any plant that could be found. The center of the canoe held a "hearth" made of a bed of carefully packed sand, rock, and the fire. In all kinds of weather, the fires of the canoes could be seen bobbing out to sea. Women rode in the stern looking for the thick kelp beds which were hiding places for shellfish and smaller fish. They would dive into the frosty and icy kelp beds, harvest what could be found, place their bounty very carefully into the canoes not to tear the delicate bark, and continue this work until the canoe could hold no more. The woman swam trip after trip until all the passengers and the catch for the day was safely ashore. They would then place their babies on their heads, and finally swim to shore for the last time.

The Yaghan were discovered by The Beagle, Darwin’s exploration ship, in 1826.

In 1863, 18-year-old Thomas Bridges learned their language, their ways, and respected their life. He was accepted without harm. He discovered a society that practiced absolute equality in all things. There were women shaman as well as men but in times of a dispute, the decision of the women was final since it was believed that women ruled the sea, and the sea held the key to their survival.

Bridges gave these people the name of Yaghan - the name of an area in the central channels which was favored as the tribal gathering place. The name they called themselves was "Yemana", which simply meant "living people". Diseases brought by those visiting from Europe decimated the Yaghan and their numbers rapidly diminished until no one but Cristina Calderón.

Hai Kur Mamashu Shis means “I want to tell you a story” in the endangered Yaghan language. Translated into English by Jacqueline Windh, it is a story of the Yaghan (or (or Yámana) people of southernmost South America by Cristina Zárraga.

The Yaghan are the southernmost indigenous people in the world. Their territory comprises the canals and fiords of southern Patagonia: from Tierra del Fuego to Cape Horn. Their population was decimated after the arrival of the Europeans.

Cristina Calderón is the last Yaghan tribe member who is pure-blooded and who grew up with the traditions and speaking the Yaghan tongue. She and her late sister Ursula have told the stories that they heard from their elders as children to Cristina’s grand-daughter Cristina Zárraga in Spanish, and Windh has translated those tales into English. The book is lovingly illustrated with the most tender woodcuts by Jimena Saiter.