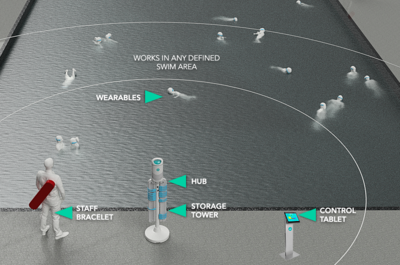 The WAVE Drowning Detection Systems or WAVE DDS is an innovative wireless real-time swimmer tracking system that determines if any swimmer is at risk of drowning and immediately alerts your staff so they can investigate and intervene if necessary. The system works in all types of water including pools, lakes, oceans, and rivers. It is not affected by water type, depth, clarity, glare, bubbles, marine life or other environmental factors that can adversely impact other technologies.

To dramatically reduce the incidence of preventable, senseless drowning through the use of technology, education and public awareness.

The WAVE Drowning Detection Systems was nominated for the 2019 World Open Water Swimming Offering of the Year award as follows:


Lifeguards, divers, kayakers, paddleboarders, safety boats, tow floats, Swim Angels, rest pontoons...the open water swimming community has developed a comprehensive safety net for its participants over the decades. But Mark Caron and the team at WAVE Drowning Detection Systems have significantly widened the safety net with a reliable, simple, easy-to-set up, easy-to-use anywhere systems for widescale adoption in lake, sea, bay and ocean swims. The WAVE alert is set off if a swimmer has been submerged for too long, so that quick lifesaving intervention is started. For augmenting current open water safety systems with simplicity and reliable technology, for dramatically changing the aquatic safety profile with a simple tracker that is attached to swimmers' goggles and immediately alerts safety personnel if a swimmer goes underwater too long, and for developing a system that can be implemented at any open water venue, WAVE Drowning Detection Systems by Mark Caron is a worthy nominee for the 2019 World Open Water Swimming Offering of the Year.

Board of Aquatic & Industry Advisors