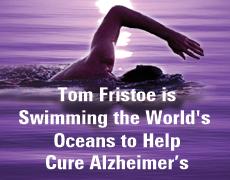 Tom Fristoe is an American pool and open water swimmer living in Bend, Oregon and founder of TeamUnify. Fristoe is a former world-class pool and open water swimmer. He was a standout collegiate swimmer at Long Beach State University in California where he earned a degree business finance. Fristoe also notched four consecutive Seal Beach Rough Water 10-mile Swim victories and several top ten rankings in U.S. Masters Swimming over the course of his career, all the while finding repeated success as a serial tech entrepreneur in Silicon Valley.

He was named one of the top 10 most impactful people in swimming by Swimming World Magazine in 2014.

Fristoe is the CEO and founder of TeamUnify, the leading team management program in the world. TeamUnify is a comprehensive software and database platform that allows swim clubs to manage billing, attendance, event entry, volunteer management, performance tracking and communications. TeamUnify’s singular focus on swimming has produced the most advanced swim team management platform in existence.

He was also the Founder & CEO at SellPoint, Inc. (formerly Tentoe, Inc.) and Vice President at Specular and Euphonix.

His passion for swimming, his expertise in computer software design and delivery, his business acumen and his attention to detail and time management skills have enable him to create the leading team management software for the aquatics industry.

In a charity effort to raise money to help cure Alzheimer's Disease, Fristoe attempted the fastest completion of the Triple Crown of Open Water Swimming in 2012. His goal was to complete the Triple Crown in 34 days, one day faster than Rendy Lynn Opdycke's current record of a 35-day completion:

He swam in the 1984 USA Swimming Olympic Trials in 3 individual events and finished in the top 25 in the world in the 400 IM in the same year. He has won over 30 national masters swimming titles between 1986 and 1993.