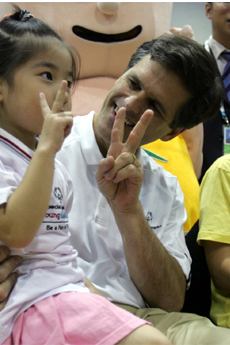 Timothy Shriver, CEO and Chairman of the Special Olympics

Timothy Perry Shriver is the Chairman of the Board of Directors and Chief Executive Officer of the Special Olympics.

After years of planning, Tim watched 35 athletes compete in the inaugural 1.5K open water swim in the Bay of Marathon near the Aegean Sea, northeast of Athens, Greece. He was as impressed with the athletes as were the hundreds of other supporters and fans who lined the coast of Marathon Bay to watch the open water event at the 2011 Special Olympics World Summer Games.

In his speeches and his actions behind the scenes, open water swimming has an outstanding and visionary friend in Tim. He welcomed the opportunity to add open water swimming to the World Summer Games schedule once Jon-Paul St. Germain and Kester Edwards developed the roll-out plan for the sport among the Special Olympics global community. That plan, with his full support, is now in the hands of Kester, Bruckner Chase and Christine Wilson to expand globally.

He is a special friend indeed of the open water swimming community and understands how collaborative and inclusive the sport is.

Tim serves 3.1 million Special Olympics athletes and their families in 175 countries. He has helped transform Special Olympics into a movement that focuses on respect, acceptance and inclusion for individuals with intellectual disabilities in all corners of the globe - and the addition of open water swimming is one specific embodiment of that philosophy.

After taking the helm at Special Olympics in 1996, Tim launched the Special Olympics' most ambitious program which has led to the recruitment of more than 2 million new athletes around the world. He has worked with the leaders of China to initiate a thriving Special Olympics Program in their country, highlighted by their hosting the 2007 Special Olympics World Summer Games in Shanghai. He has also worked with world leaders such as Nelson Mandela, Bill Clinton, George Bush, Bertie Ahern, Rafiq Hariri, Thabo Mbeki, Julius Nyerere, Hosni Mubarak and Shimon Peres to advance the growth of the Special Olympics mission and vision while challenging nations to adopt more supportive and just policies. He has spearheaded programs in developing or war-torn countries such as Afghanistan, Bosnia Herzegovina and Iraq.

Shriver was born to Sargent Shriver, a former United States Ambassador to France and the Democratic Party (United States) vice-presidential candidate in 1972, and Eunice Kennedy Shriver, the founder of Special Olympics. He is a member of the Kennedy Family through his mother.

He was the executive producer on The Ringer (2005 film), a co-producer on Amistad (1997 film) and the Disney movie The Loretta Claiborne Story, and has served as a producer or co-producer on shows for ABC, NBC and TNT. He is currently a board member of Malaria No More, a New York-based nonprofit that was launched at the 2006 White House Summit with the goal of ending all deaths caused by malaria.

He is currently the Chairman and CEO of Special Olympics. Timothy and his brother Anthony Shriver have recently aligned the Special Olympics and Best Buddies to create the Eunice Kennedy Shriver Challenge event, aimed to encourage greater acceptance and inclusion for those with intellectual and developmental disabilities.

As chairman of Special Olympics, Shriver has campaigned against mocking of and discrimination against participants in Special Olympics. He has specifically argued against use of what he calls "the R word," meaning retarded, stating that the word, "retard", is very offensive and people with intellectual disabilities should be respected and treated like all other people.