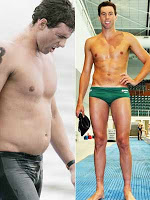 Grant Hackett with third spacing after a 10 km marathon swim

For example, an open water swimmer’s body to appear waterlogged or swollen after a long swim when fluid is trapped in the interstitial spaces in the brain, lungs, abdomen and extremities. Third spacing can be caused by a loss of electrolytes. In turn, this results in extracellular fluids going out of the blood vessels and into the skin tissue that normally is not perfused with fluids.

The marathon swimmer looked soft and pudgy when he exited the water after his crossing of the English Channel.