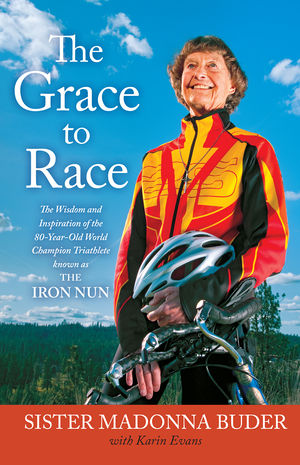 The Iron Nun is the nickname of Sister Madonna Buder, a Roman Catholic nun from Spokane, Washington, U.S.A. with the Sisters for Christian Community.

Sister Madonna, who has the freedom to choose her own ministry and lifestyle, authored a hardback book entitled The Grace to Race: The Wisdom and Inspiration of the 80-Year-Old World Champion Triathlete Known as the Iron Nun.

She began training at age 48 at the behest of Father John who told her it was a way of tweaking, "mind, body, and spirit" and for the relaxation and calmness it can bring an individual. She completed her first Iron Man event at age 55 and has continued ever since.[1]

During her sporting career, she has worked hard at also raising money for various charities. She is quoted as saying, "I train religiously".

However, 371 days later, on August 30, 2009, Sister Madonna completed Ironman Canada (Penticton, British Columbia) in a time of 16:54:30. This accomplishment broke her own record of being the oldest female to complete the Ironman distance at 79 years old. In fact the Iron Man organization has had to add new age brackets as the nun gets older! Unfortunately, although Sister Madonna started the 2010 Ironman Canada competition at the age of 80 she was unable to complete the course due to a wetsuit issue.[2] She has registered for the 2011 Ironman Canada competition and is still active. She is an avid athlete participating in numerous marathons and triathlons in addition to being a senior Olympian. She holds several records in various distances.