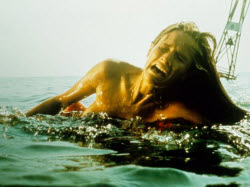 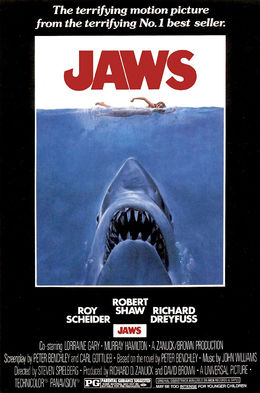 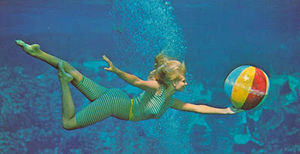 Susan Backlinie (born Susan Jane Swindall on 1 September 1946 in Ventura, California) is a former actress, animal trainer and stuntwoman who specialized in swimming work. She is known for her role as Chrissie Watkins, the first victim in Steven Spielberg's 1975 movie blockbuster Jaws. She appeared in The Lady and the Lion pictorial in the January 1973 issue of Penthouse Magazine.

She was an excellent swimmer in her teenage years and later became a professional swimmer at Florida's long running Paradise Mermaid Follies show.

Originally, the shot in Jaws of the shark attack where Backlinie, playing Chrissie Watkins, was killed was shot several times over the course of 3 days. The final shot was produced when Backlinie was not told when she would be attacked. When the diver below her grabbed onto, and pulled her leg to pull her under, she gave a genuine scared reaction that remained in the final movie edit. There were two 300-pound weights attached to Backlinie that were being tugged by two groups of crewmen on shore. One group would pull right, and the other would pull left in order to create the iconic death scene. Later, when she was recording the screams to be dubbed over the film, Spielberg had her tilt her head back and poured water down her throat while she screamed.

In the movie when the remains of Chrissie Watkins were examined, the tissue damage indicates the non-frenzied feeding of a large squalus is described by oceanographer Matt Hooper. Squalus is Latin for shark. On the beach when Chrissie's remains are discovered, the prop arm that was originally used looked too fake in the scene so director Steven Spielberg had a female crew member buried in the sand with only her arm exposed.