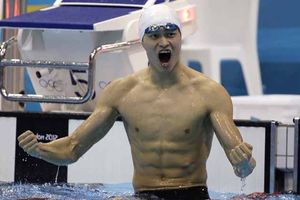 Sun Yang (simplified Chinese: 孙杨; traditional Chinese: 孫楊; born 1 December 1991 in Hangzhou, Zhejiang) is a 4-time Chinese Olympic distance freestyle swimmer. He swam for China at the 2008 Olympics and broke the 1500m freestyle world record at the 2011 FINA World Swimming Championships. He won the 400m and 1500m freestyle at the 2012 London Olympics, becoming the first Chinese man ever to win an Olympic gold medal in swimming as well as a gold in the 400m freestyle, a silver in the 200m freestyle and a bronze in the 4x200m freestyle relay. At the 2012 Olympics, he was one of two male swimmers to win two individual titles, the other being Michael Phelps.