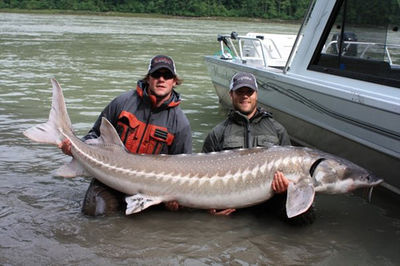 Sturgeon is the common name used for 26 species of fish in the family Acipenseridae, including the genera Acipenser, Huso, Scaphirhynchus and Pseudoscaphirhynchus. The term includes over 20 species commonly referred to as sturgeon and several closely related species that have distinct common names, notably sterlet, kaluga and beluga.

Sturgeon is sometimes used more exclusively to refer to the species in the two best-known genera, Acipenser and Huso.

One of the oldest families of bony fish in existence, sturgeon are native to subtropical, temperate and sub-Arctic rivers, lakes and coastlines of Eurasia and North America. They are distinctive for their elongated bodies, lack of scales, and occasional great size: sturgeons ranging from 7–12 feet (2-3½ m) in length are common, and some species grow up to 18 feet (5.5 m). Most sturgeons are anadromous bottom-feeders, spawning upstream and feeding in river deltas and estuaries. While some are entirely freshwater, very few venture into the open ocean beyond near coastal areas.

Several species of sturgeons are harvested for their roe, which is made into caviar — a luxury food which makes some sturgeons pound for pound the most valuable of all harvested fish. Because they are slow-growing and mature very late in life, they are particularly vulnerable to exploitation and to other threats, including pollution and habitat fragmentation. Most species of sturgeons are currently considered to be at risk of extinction, making them more critically endangered than any other group of species.