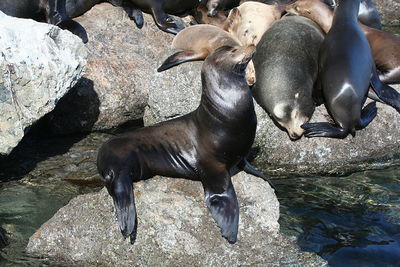 noun - Sea lion are pinnipeds and sea mammals characterized by external ear flaps, long foreflippers, the ability to walk on all fours, and short, thick hair. Their range extends from the subarctic to tropical waters of the global ocean in both the Northern and Southern Hemispheres, with the notable exception of the northern Atlantic Ocean. They have an average life span of 20–30 years. A male California sea lion weighs on an average about 300 kg (660 lb) and is about 8 ft (2.4 m) long, while the female sea lion weighs 100 kg (220 lb) and is 6 ft (1.8 m) long.