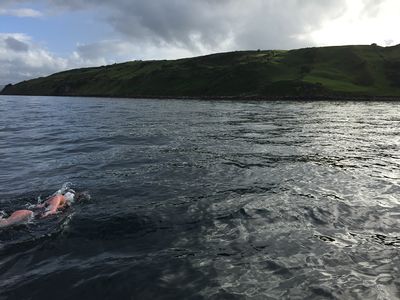 Sabrina Wiedmer doesn't like the cold or jellyfish. But once she started open water swimming in her adopted Ireland, she learned to compartmentalize the discomfort of the cold and eventually set a women's record in the Ice Mile in 25:51 and later tied a world record in the Ice Kilometer in 13:58. A former sprint backstroker in Switzerland, Wiedmer quickly extended her reach to win local sea swims in Ireland and then cross one of the world's mightiest channel swims: the 21-mile North Channel between Northern Ireland and Scotland. She also completed a Tory Island crossing, a Loch Lomond crossing, and set the record for the Dál Riata Channel after listening to channel veterans and studying from past attempts. For learning how to effectively deal with the cold and marine life while setting two world records, for maintaining a wide smile and positively joyful attitude as she transformed from a pool sprinter to a hardened ice swimmer and a tough channel swimmer, for effectively acclimating to sub-5ºC water and across turbulent channels, Sabrina Wiedmer is a worthy nominee for the 2016 World Open Water Swimming Woman of the Year.

Bauernfeind was named to the 2017 World's 50 Most Adventurous Open Water Women by the World Open Water Swimming Association. The women are listed below, alphabetically by last name: