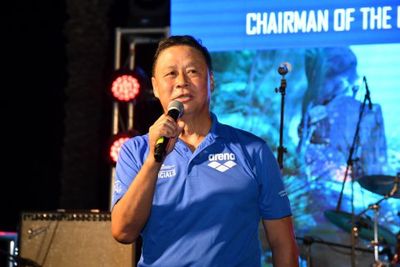 He was nominated for the 2020 WOWSA Awards in the World Open Water Swimming Man of the Year category with the following nomination: Ronnie Wong has always worked hard, starting before he qualified for two Olympic Games in the 1970's. But in the Year of COVID-19, he had to work especially diligently behind the scenes, making sure that the Olympic 10K Marathon Swim event was not removed from the Olympic calendar as had been rumored. Wong, the 68-year-old chairperson for the FINA Technical Open Water Swimming Committee, worked the phones and gathered information and allies from the global open water swimming committee to convince the International Olympic Committee to, at least until the 2024 Paris Olympics, to keep with the only open water swimming event in the Games. For remaining an energetic and influential force while never calling attention to himself in continuing to promote and organize the sport at its highest levels, for working with the organizers of the rescheduled 2020 Tokyo Olympics to navigate the delay of the marathon swim, and for remaining so passionate and objective after over two decades of service to the sport, Ronnie Wong of Hong Kong is a worthy nominee of the 2020 World Open Water Swimming Man of the Year.​

As members of the FINA Technical Open Water Swimming Committee, American Sid Cassidy, Australian Chris Guesdon, and Fijian Dennis Miller literally mapped out the Olympic 10K Marathon Swim concept on a napkin in a restaurant. This revolutionary plan eventually led to the sport of open water swimming being added to the 2008, 2012 and 2016 Olympics.