Robert W. Dowlin, inductee in the International Marathon Swimming Hall of Fame in the Class of 1970 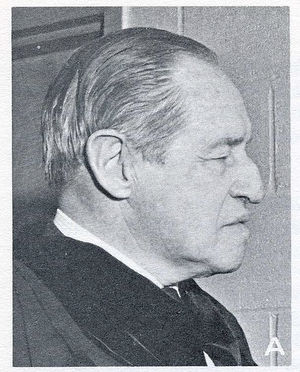 Following his father's death in 1943, Dowling took over his father's company, City Investing Company, a real estate firm. A multi-talented entrepreneur and visionary, he was among the producers of the original Sound of Music. Dowling won a Tony Award in 1948 for his contribution to theatre as result of his ownership of the Fulton Theatre, Morosco Theatre and Coronet Theatre and Gaity Theatre. He was also head of the New York City Office of Cultural Affairs and owned 7 theaters in New York City and produced movies. He was president of the National Urban League and a director of the Negro College Fund.

Dowling College is also named for him. Dowling, who was a friend of Adelphi University dean Allyn P. Robinson, provided a grant of $3 million in 1968, which allowed the Adelphi campus in Oakdale, New York to become Dowling College.

ROBERT W. DOWLING, able financier and industrialist, you have revealed the strong sense of responsibility that is the strength of our democratic society. As city planner, builder extraordinary, and devoted friend of all the arts, you have not only enhanced our skylines, but you have deepened our vision.

Your concern has known no national barriers; you have ably served your nation and the world by drawing men together through the universal sharing of the arts. As an humanitarian you have sought to bring healing to men, and beyond that to prevent the tragedies we inflict upon ourselves.

Your leadership in education has been notable through the years. We celebrate particularly the fact that you have given to this institution far more than a distinguished name, far more than the vital resources so important to its future. You have shown a concerned commitment to today’s youth and a faith in their future. ROBERT W. DOWLING, as a mark of gratitude, of deep respect and honor, we are proud to confer on you Dowling College’s first Honorary Degree, Doctor of Human Letters.