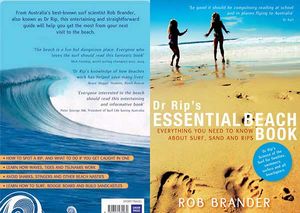 The most popular reference book on iTunes

Rob Brander, whose nickname is Dr Rip, is a coastal geomorphologist, surf safety educator and Senior Lecturer in the School of Biological, Earth and Environmental Sciences at the University of New South Wales in Sydney, Australia. He has been studying beaches and surf zones for 20 years and received his BSc and MSc at the University of Toronto. His PhD on the morphodynamics of rip currents was completed at the University of Sydney in 1997.

He has published over 20 articles based on his research on rip currents, coral reef-islands, and the 2004 tsunami and has taught at University of New South Wales since 2000.

Known as "Dr Rip", he is part of the OceanFit team and the author of the best selling ‘Dr Rip’s Essential Beach Book; everything you need to know about surf, sand and rips’. His award-winning videos can be found on Science of the Surf.