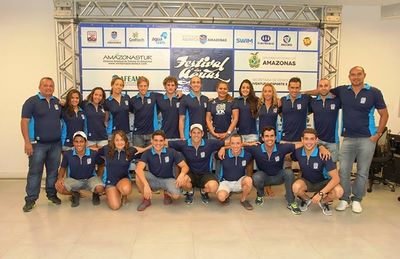 Rio Negro Challenge Amazonia or the Amazon Challenge is a 1.5 km, 3 km and 30 km (18.6-mile) marathon swim from Iranduba to Manaus in Brasil, partly along the Rio Negro Bridge in the Rio Negro.

Iranduba is a municipality located in the Brazilian state of Amazonas. Its population in 2012 was 41,947 and its area is 2,215 km², making it the smallest municipality in Amazonas in terms of area. It is located directly south of Manaus, across the Rio Negro. It is connected to Manaus by the Manaus Iranduba Bridge, a cable-stayed bridge which opened in 2011.

The Rio Negro Bridge (Portuguese: Ponte Rio Negro) is a cable-stayed bridge over the Rio Negro with 3,595 metres (11,795 feet) of length that links the cities of Manaus and Iranduba.