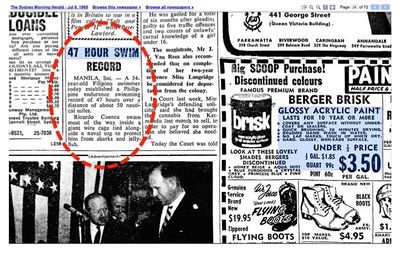 Ricardo Cuenca is an open water swimmer from the Philippines who swam 92.6 km (50nm) over 47 hours on 6 July 1969 as a 34-year-old from Fortune Island off Nasugbu, to the Luneta seawall in Manila Bay in the Philippines swimming inside a wire shark cage made to protect him from sharks and jellyfish. The shark cage was tied alongside a naval tug boat. He was later congratulated by Philippine President Marcos