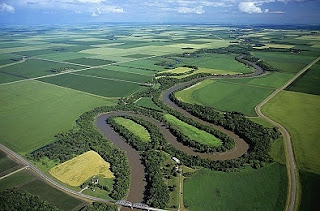 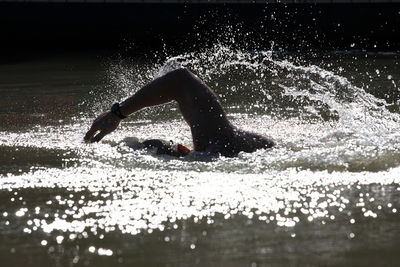 The Red River of the North originates at the confluence of the Bois de Sioux and Otter Tail rivers between the U.S. states of Minnesota and North Dakota. It flows northward through the Red River Valley, forming the border of Minnesota and North Dakota and continuing into Manitoba, Canada. It empties into Lake Winnipeg, whose waters join the Nelson River and ultimately flow into the Hudson Bay, which is considered part of the Arctic Ocean.

The Red River flows through several urban areas along its path, including those of Fargo-Moorhead and Grand Forks in the United States and Winnipeg in Canada. It is the site of numerous endurance sports events including the Extreme North Dakota Watersports Endurance Test (END-WET), a 26-mile solo swim and relay swimming competition.

The Red River is about 885 kilometers (550 miles) long of which about 635 kilometers (395 miles) are in the United States and about 255 kilometers (158 miles) are in Canada. The river falls 70 meters (230 ft) on its trip to Lake Winnipeg where it spreads into the vast deltaic wetland known as Netley Marsh.

In the United States, the Red River is sometimes called the Red River of the North, to distinguish it from the Red River that is a tributary of the Mississippi River, and that forms part of the border between Texas and Oklahoma.

The Extreme North Dakota Watersports Endurance Test or END-WET, is a 36-mile (57.9 km) mixed-sports event where solo and relay open water swimmers pit themselves against other endurance athletes down the Red River between North Dakota and East Grand Forks, Minnesota in the United States. It is one of the longest marathon swims in the world and directed by Andy Magness.