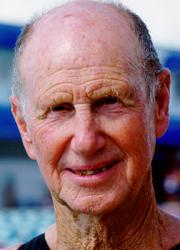 Raymond F. Taft, honoree in the International Swimming Hall of Fame and recipient of the 1979 Capt. Ransom J. Arthur M.D. Award by U.S. Masters Swimming together with his wife Zada Taft

Raymond F. Taft (died 2002 in Redwood City, California) was an American pioneer and champion in masters swimming and an open water swimming coach and pilot. He began his swimming career under the tutelage of another pioneering swim coach Charles Sava, specializing in backstroke. In 1940, Taft had the fastest time in the world in the 100-meter backstroke, but was denied a chance to compete in the Olympics, which were canceled due to World War II.

Taft and his wife, Zada Taft, taught three generations -- thousands of people -- how to swim at their family-run swim school in San Mateo, California. He also was a founder in the early 1970s of masters swimming and received the 1979 Capt. Ransom J. Arthur M.D. Award, the highest award of U.S. Masters Swimming, together with Zada. Throughout his career, he set a number of world and national records and won an equal number of national and international championships.

After a stint in the U.S. Army, during which Taft often would swim alongside troop transports, he returned to San Francisco, California. In 1955, he and his wife founded the Taft Swim School, now operated by his children.

At the urging of the parents whose children he taught, Taft in 1972 began the first masters swimming team in the United States, the San Mateo Master Marlins.

Taft held 15 age-group world records and 50 age-group U.S. records in events ranging from the 800-meter freestyle to the 400-meter individual medley. He was ranked first in the nation more than 210 times. In the last year of his life, Taft was ranked in the top 10 nationally for his age group in 11 events, including top rankings in four events. Many of his accomplishments came after quadruple bypass surgery in 1990.