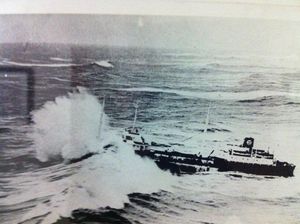 Ship heading through the Potato Patch

noun - Potato Patch Shoal is part of the larger Four Fathom Bank outside of the San Francisco Bay. The formidable shipping hazard is within the course of swimmers who attempt solo swims and relays between the Golden Gate Bridge, California coastline and the Farallon Islands. It is an expanse of relatively shallow reef covering several square miles, with water depths ranging from 23 to 36 feet.

The Potato Patch is the northernmost area of San Francisco Bar alluvial silt deposits. Waves breaking over the shoal are visible at low tides from the coastal hills in the Golden Gate National Park.

It is an extraordinarily rough area of living hell for boaters, fishermen and, especially, open water swimmers.

Surfline describes the area as "creepy - a minefield of shifting, throwing peaks, extending from a couple of hundred yards offshore all the way to the horizon. During a giant swell in the Potato Patch, you will stare at nature in all its beautiful evil."

Santa Cruz adventurers Perry Miller and Doug Hansen had a tow-in surfing session in the Potato Patch using their Jet Ski. "It was the devil's playground out there."

The Potato Patch was named for the 1800s potato farms near Bolinas Lagoon which shipped to markets in San Francisco: "Occasionally a potato boat would capsize on the sand bar, spilling its load..." (Doris Sloan, Geology of the SF Bay Region, UCPress 2006, p.121.)