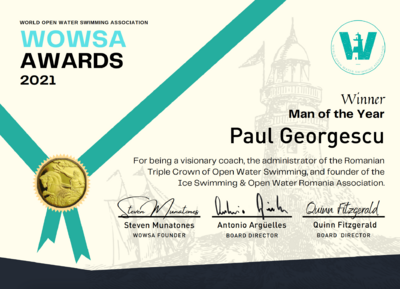 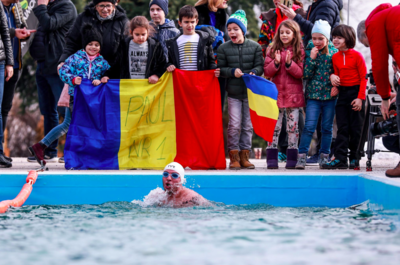 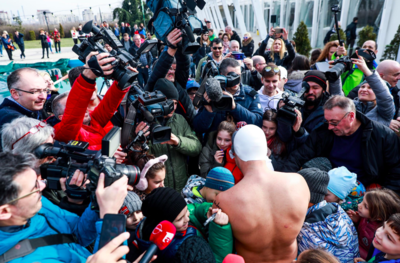 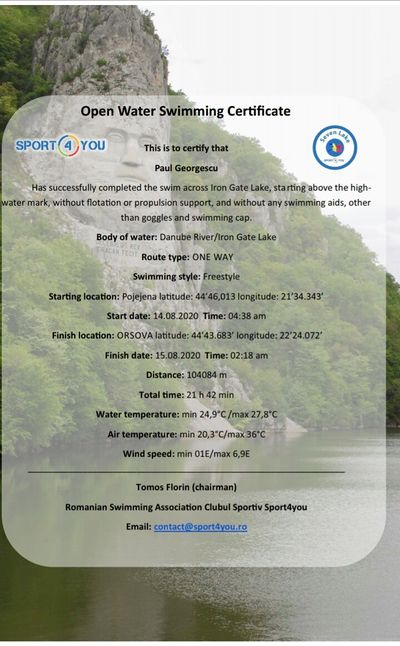 Paul Eugen Dorin Georgescu certificate for the 104.089 km Iron Gates of the Danube Swim in Romania

Paul Eugen Dorin Georgescu was a record-setting member of the Antarctica 2020 International Swim, a series of solo ice swimming challenges and environmental swims inside the Antarctic Circle (66°33′46.5″ south) that was nominated for the 2020 World Open Water Swimming Offering of the Year

Paul Georgescu, a 42-year-old multi-talented triathlete, physical therapist, coach, referee, water polo player, and professor at the International British School of Bucharest, took up his newly developed talent as an ice swimmer to an entirely new level. Less than a year after completing his first Ice Mile in 3.02°C water in a pool in his native Romania, he traveled to Hanusse Bay, Antarctica and set a Zero Ice Mile world record in 0.0°C water and 2.0°C air in 22 minutes 44 seconds at the bottom of the world. He then completed the 104 km Iron Gates of the Danube Swim in the middle of the pandemic. In a year of uncertainty and unknowns, Georgescu continues to seek adventures to inspire his students and the next generation, giving them confidence to face challenges with a strength of character and an air of positivity. For continuing to demonstrate a wide range of aquatic talents in cold and warm temperatures including at the Antarctica 2020 International Swim, for inspiring and mentoring swimmers of all ages in his native Romania with a record-setting Zero Ice Mile, and for transforming himself from a water polo player and triathlete to the fastest Zero Ice Mile swimmer in the world and an accomplished marathon swimmer, Paul Georgescu or Romania is a worthy nominee for the 2020 World Open Water Swimming Man of the Year.

Georgescu participated in the Antarctica 2020 International Swim that was nominated for the 2020 WOWSA Awards in the World Open Water Swimming Offering of the Year category with the following nomination: The Southern Ocean is at the bottom of the world surrounding the continent of Antarctica. Inhospitable to humans, but remarkably, Ger Kennedy organized a series of ice swims accessible around the ice-covered tundra to some of the most hardened ice swimmers on the planet. Antarctica 2020 International Swim was held inside the Antarctic Circle to celebrate Lynne Cox's pioneering Antarctica swim in 2002 and enable people to swim short distances or Polar Ice Miles. From Argentina, the Polar Swimming Quest set off by ship and stopped in the Bellingshausen Sea and the Weddell Sea over a few weeks. 12 swimmers entered the cold waters of Antarctica with bioprene only with three major swims safely recorded. Cath Pendleton set a world record in Hanusse Bay with a 32:54 Zero Ice Mile in 0.03°C water and -3.2°C air. Paul Eugen Dorin Georgescu set another world record in Hanusse Bay in 0.0°C water with 22 minute 44 second Zero Ice Mile. Two days later, Ger Kennedy swam another Zero Ice Mile in Paradise Bay in 0.53°C water and -1.10°C air in 34 minutes 2 seconds. For safely organizing swims by Kathryn Pratschke, Redy Redfern, Dee Newell, Jane Hardy, Tiffiny Quinn, Michelle White, Una Campbell, Martina Ring, Anne O'Donovan, Matías Ola, and Alice Kelliher in Antarctica with the help of Sean Cullen and Dimcea Lulian Zamfir, for encouraging marine conservation awareness while encountering challenging conditions, and for enabling the extension of the known physical boundaries for everyone involved, the Antarctica 2020 International Swim by Ger Kennedy is a worthy nominee for the 2020 World Open Water Swimming Offering of the Year.

Georgescu was nominated for the 2019 World Open Water Swimming Man of the Year award with the following nomination:


Paul Georgescu can go very cold or very warm. The multi-talented triathlete, physical therapist, coach, referee, water polo player, and professor at the International British School of Bucharest has speed to burn in both ice swimming and warm channel swim. He completed the first Ice Mile by a Romanian in 3.02°C water and became the first Romanian to complete a 42 km crossing of the Molokai Channel in 13 hours 6 minutes. He also won the 500m International Ice Swimming Association World Championship title and finished 5th in the Ice Kilometer in Murmansk, Russia, and finished 7th in the International Ice Swimming Association World Cup Series. He also coached 12-16 year old students on the fastest English Channel mix gender relay of 2019. For demonstrating a wide range of open water swimming talents in cold and warm temperatures, for inspiring and mentoring swimmers of all ages in his native Romania, and for transforming himself from a water polo player and triathlete to one of the fastest ice swimmers in the world, Paul Georgescu is a worthy nominee for the 2019 World Open Water Swimming Man of the Year.

Iron Gates of the Danube Videos

Before his Ice Mile

He was selected as the 2021 World Open Water Swimming Man of the Year. The winners and nominees of the 2021 WOWSA Awards included: