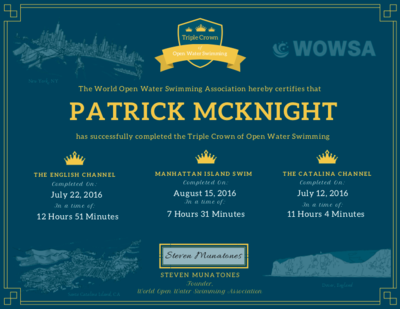 Patrick McKnight is a 50-year-old American open water swimmer, scientist, and adventurer from Fairfax, Virginia. He is an Associate Professor at George Mason University who completed the fastest turnaround of the Triple Crown of Open Water Swimming (34 days) and was named to the World's 50 Most Adventurous Open Water Men in 2017 by the World Open Water Swimming Association. He serves as a Marathon Swimming Mentor.

Brendan Cooperkawa's video of Patrick McKnight swimming past Roosevelt Island and toward Mill Rock to finish the 2016 20 Bridges Swim around Manhattan Island on 15 August 2016.

Video by Brendan Madden of Patrick McKnight becoming the 10th person in history to achieve the Peak and Pond Challenge on 18 May 2018.

Professor Patrick McKnight made two attempts at climbing Mount Everest in 2014 and 2015, but then he turned his focus on completing the fastest Triple Crown of Open Water Swimming in history. The 50-year-old had a target on a record set by a world-class 24-year-old from one of the hotbeds of channel swimming. He made his plans, he bought his airline tickets, and he left no room for going off plan. He started with a Catalina Channel crossing on July 12th in 11 hours 4 minutes; he crossed the English Channel on July 21st in 12 hours 54 minutes; he completed his Manhattan Island circumnavigation on August 15th in 7 hours 31 minutes to break the record by 1 day. For his eclectic interest in conquering challenges from tall mountains to tough channels, for taking on and breaking a record of an elite swimmer less than half his age, for flawlessly pulling off his 34-day plan en route to living a purpose-driven life, Professor Patrick McKnight's Triple Crown of Open Water Swimming is a worthy nominee for the 2016 World Open Water Swimming Performance of the Year.

McKnight oversees MRES (Measurement, Research methodology, Evaluation, and Statistics -- pronounced “mysteries”) - a group of diverse students and faculty who work together, collaborate with others, travel internationally, and aim to improve science. They collaborate with Google, Intel, Koch Foundation, National Geographic, Merck, among others. McKnight’s work largely focuses on applications of psychological science to content areas in medicine, psychology (usability, psychophysics, trust, purpose in life, and anxiety/depression) and methods (crowdsourcing, data validity, and scale development). He serves on the Advisory Board of Stats.org and contributes to many scientific initiatives - commercial, military, and public domains.

McKnight was named to the World's 50 Most Adventurous Open Water Men in 2017 (alphabetized by last name) by the World Open Water Swimming Association: