Difference between revisions of "Panama" 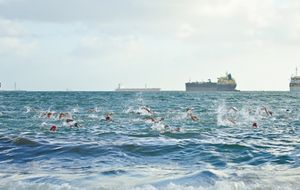 Vuelta Acuática Internacional a Colón, a 5 km ocean competition on the Atlantic coast of Panama

Panama, officially the Republic of Panama (Spanish: República de Panamá), is the southernmost country of Central America. Situated on the isthmus connecting North and South America, it is bordered by Costa Rica to the west, Colombia to the southeast, the Caribbean to the north and the Pacific Ocean to the south. The capital is Panama City.

Explored and settled by the Spanish in the 16th century, Panama broke with Spain in 1821 and joined a union of Nueva Granada, Ecuador, and Venezuela, named the Republic of Gran Colombia. When Gran Colombia dissolved in 1831, Panama and Nueva Granada remained joined. Nueva Granada later became the Republic of Colombia. With the backing of the United States, Panama seceded from Colombia in 1903, allowing the Panama Canal to be built by the U.S. Army Corps of Engineers between 1904 and 1914. In 1977, an agreement was signed for the complete transfer of the Canal from the United States to Panama by the end of the 20th century. Panama's jungle is home to an abundance of tropical plants, animals and birds – some of them to be found nowhere else in the world.