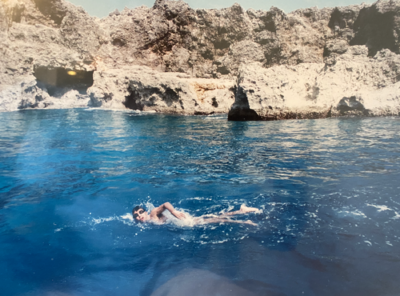 Steven Munatones completed a 29 km circumnavigation swim around Yonaguni Island in Okinawa in 7 hours 8 minutes in October 1994, televised on NHK-TV in Japan

Okinawa Island (Japanese: 沖縄本島) is the largest of the Okinawa Islands and the Ryukyu Islands (Nansei) of Japan. It is roughly 640 km (400 miles) south of the rest of Japan, roughly the same distance off the coast of China, and 300 miles north of Taiwan. Okinawa hosts the majority of the US troops stationed in Japan.

The island's population is known as one of the longest living people in the world with 34 centenarians per 100,000 people.

Okinawa Prefecture (Japanese: 沖縄県) is the southernmost prefecture of Japan. It comprises hundreds of the Ryukyu Islands in a chain over 1,000 km (620 miles) long. The Ryukyus extend southwest from Kyushu (the southwesternmost of Japan's main four islands) to Taiwan. The Okinawa Prefecture encompasses the southern two thirds of that chain. Naha, Okinawa's capital, is located in the southern part of Okinawa Island.

The Ryukyu Islands (琉球諸島) are a chain of volcanic Japanese islands that stretch southwest from Kyushu to Taiwan: the Ōsumi, Tokara, Amami, Okinawa, and Sakishima Islands (further divided into the Miyako and Yaeyama Islands), with Yonaguni Island being the southernmost. The largest of the islands is Okinawa. The islands have a subtropical climate with mild winters and hot summers. Precipitation is very high, and is affected by the rainy season and typhoons. Except the outlying Daitō Islands, the island chain has two major geologic boundaries, the Tokara Strait between the Tokara and Amami Islands, and the Kerama Gap between the Okinawa and Miyako Islands. The islands beyond the Tokara Strait are characterized by their coral reefs.

There are several ocean swimming competitions throughout Okinawa Prefecture. There are a few marathon swims including: