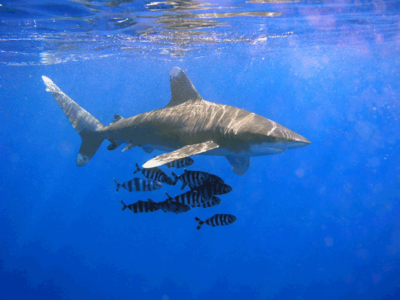 noun - Oceanic whitetip shark is a large pelagic shark inhabiting tropical and warm temperate seas. Its stocky body is most notable for its long, white-tipped, rounded fins. It is an aggressive but slow-moving fish that dominates feeding frenzies, and is a danger to shipwreck or air crash survivors and ocean swimmers.

The oceanic whitetip is found globally in deep, open water, with a temperature greater than 18°C (64°F). It prefers waters between 20°C (68°F) and 28°C (82°F) and tends to withdraw from areas when temperatures fall outside of this. They were once extremely common and widely distributed, and still inhabit a wide band around the globe; however, recent studies suggest that their numbers have drastically declined because its large fins are highly valued as the chief ingredient of shark fin soup and, as with other shark species, the whitetip faces mounting fishing pressure throughout its range.

The shark spends most of its time in the upper layer of the ocean—to a depth of 150 meters (490 ft) and prefers off-shore, deep-ocean areas. It is typically solitary, though gatherings have been observed where food is plentiful. Unlike many animals, it does not have a diurnal cycle, and is active both day and night. Its swimming style is slow, with widely spread pectoral fins. Despite their habitual isolation from members of their own species, pilot fish, dolphinfish, and remora may accompany them.

It is bronze, brown, bluish or gray dorsally (the color varies by region), and white ventrally (although it may occasionally have a yellow tint). The Oceanic Whitetip Shark is a medium-sized requiem shark. The largest specimen ever caught measured 4m (13 ft), an exceptionally large size considering few specimens are known to exceed a length of 3m (9.8 ft).

The shark feeds mainly on pelagic cephalopods and bony fish. However, its diet can be far more varied and less selective. It is known to eat threadfins, stingrays, sea turtles, birds, gastropods, crustaceans, and mammalian carrion. The bony fish it feeds on include lancetfish, oarfish, barracuda, jacks, dolphinfish, marlin, tuna, and mackerel. Its feeding methods include biting into groups of fish and swimming through schools of tuna with an open mouth. When feeding with other species, it becomes aggressive.

The oceanic whitetip is usually solitary and slow-moving, and tends to cruise near the top of the water column, covering vast stretches of empty water scanning for possible food sources. Until the 16th century, sharks were known to mariners as "sea dogs" and the oceanic whitetip, the most common ship-following shark, exhibits dog-like behaviour when its interest is piqued: when attracted to something that appears to be food, its movements become more avid and it will approach cautiously but stubbornly, retreating and maintaining a safe distance if driven off, but ready to rush in if the opportunity presents itself. Oceanic whitetips are not fast swimmers, but they are capable of surprising bursts of speed. Whitetips commonly compete for food with silky sharks, making up for its comparatively leisurely swimming style with aggressive displays.

Groups often form when individuals converge on a food source, whereupon a feeding frenzy may occur. This seems to be triggered not by blood in the water or by bloodlust, but by the species' highly strung and goal-directed nature (conserving energy between infrequent feeding opportunities when it is not slowly plying the open ocean). The oceanic whitetip is a competitive, opportunistic predator that exploits the resource at hand, rather than avoiding trouble in favour of a possibly easier future meal.