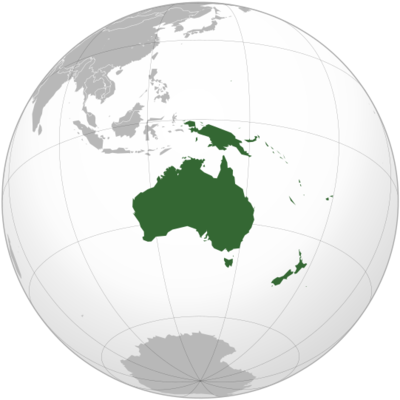 Oceania is a geographic region comprising Melanesia, Micronesia, Polynesia and Australasia. Spanning the eastern and western hemispheres, Oceania covers an area of 8,525,989 square kilometres (3,291,903 sq mi) and has a population of 40 million. Oceania is the smallest continental grouping in land area and the second smallest in population after Antarctica.

The islands at the geographic extremes of Oceania are Bonin Islands, a politically integral part of Japan; Hawaii, a state of the United States; Clipperton Island, a possession of France; the Juan Fernández Islands, belonging to Chile; the Campbell Islands, belonging to New Zealand; and the Cocos (Keeling) Islands, belonging to Australia. Oceania has a diverse mix of economies from the highly developed and globally competitive financial market of Australia and New Zealand, which rank high in quality of life and human development index, to the much less developed economies that belong to countries such as of Kiribati and Tuvalu,[8] while also including medium-sized economies of pacific islands such as Palau, Fiji and Tonga. The largest and most populous country in Oceania is Australia, with Sydney being the largest city of both Oceania and Australia.

Oceania is one of the continents of the Continents Seven, a series of 7 solo open water swims that are completed in all of the seven continents of Planet Earth (Africa, Antarctica, Asia, Australia (or Oceania), Europe, North America, and South America) either (1) within one year, or (2) over the course of one's career.