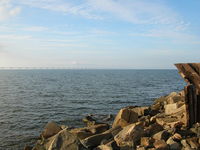 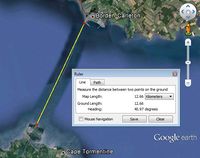 A snapshot of Google Earth, measuring the shortest distance across the Strait at 12.66km (7.9 miles).

The Northumberland Strait is located on the east coast of Canada. It separates Prince Edward Island from New Brunswick and Nova Scotia.

The 12.7 kilometer (7.9 mile) path from Cape Jourimain, New Brunswick to Borden-Carleton, Prince Edward Island is shortest route across the Strait. This distance can be verified via Google Earth.

The Northumberland Strait is noted for its warm water and absence of sharks at its narrowest crossing.

The Northumberland Strait (French: détroit de Northumberland) is a strait in the southern part of the Gulf of Saint Lawrence in eastern Canada. The Strait is formed by Prince Edward Island and the Gulf's eastern, southern and western shores.

In 1963 and 1964, the swim across the Strait was part of the World Professional Marathon Swimming Federation circuit. Participating swimmers included Regent LaCoursière (credited as John LaCoursière), Herman Willemse, and George Park.

Swim details have been retrieved from various reports in the news media. Sources of those reports and recorded times are maintained by SoloSwims.com. In the absence of an official recording body, there is no guarantee that these details are correct or complete.

The SoloSwims.com list has been broken into two parts:

The Confederation Bridge spans the Northumberland Strait at its narrowest crossing. The bridge is 12.9 km (8.1 miles) long, including the approaches. The bridge, which curves, does not take the shortest path across the Strait.

The Confederation Bridge gives a sense of progress across the middle 11 km (6.9 miles) of the Strait: the bridge has 44 main piers spaced 250 meters (273 yards) apart.

During the winter months between December and April, sea ice typically covers the entire Strait and the Gulf of St. Lawrence.

The St. Lawrence Global Observatory offers near real-time and cumulative historical data through detailed information about sea surface temperature and ice coverage (via its Remote Sensing and Ice Concentration services).

All successful swims to date have been completed between July 15 and September 6. Temperatures between mid-July and early September typically range between 18-22°C (64-72°F).

Fisheries and Oceans Canada created a web-based mapping application for the "Traditional Fisheries Knowledge for the Southern Gulf of Saint Lawrence" to display species data collected from local fishers between 1995 and 1996. Chart 4406 shows the data collected in the most-swum area of the Strait.

At the height of their season, the frequency of jellyfish can be overwhelming, and can be as high as one jellyfish for every 4 square metres. Jellyfish seem to concentrate at the shore, and begin to die out during late July.

American Lobster are present and fished in the Strait. There are large crabs near shore; swimmers would be wise to look before putting their feet down.

Fishermen claim that the area of the Strait near the Confederation Bridge is too shallow for sharks, and state that they have never seen them in the vicinity. (Near the bridge, the Strait only reaches a depth of 26 metres.) However, Fisheries and Oceans Canada documents the presence of Great White Sharks in the Northumberland Strait.

The Northumberland Strait experiences predictable but irregular tides. Due to the tides and currents, swimmers invariably cover a V-shaped course, with the deviation from a straight-line being dependent upon their speed and the phase of the moon (Spring tide or neap tide).

In contrast with the tides of the English Channel, which change 3-6 metres between high and low tide, the tides of the Northumberland Strait are far gentler, changing 2 metres at most, and occasionally not changing at all.

During the summer of 2012, the tides at Cape Tormentine, New Brunswick range between 3h 34 minutes and 8h 17 minutes. Tide information can be found on the website of Fisheries and Oceans Canada. 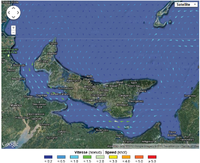 Vectors predicting direction and velocity of currents in the Northumberland Strait on April 26, 2012 at 02:00.

Typical currents peak at 2.1 knots (3.9 km/h) during the spring tide and, once each summer month, run at a minimum of 0.7-1.0 knots (1.3-1.9 km/h). Information on the tidal currents can be found in the Department of Fisheries and Oceans' Canadian Tide and Current Tables. This information recently became available (free) online. Print books are available at authorized chart dealers, and often in public libraries.

There are two separate lobster fishing seasons in the Northumberland Strait.

In Atlantic Canada, lobster fishing seasons are determined by districts called LFAs (lobster fishing areas). The fishing season in LFAs 26A and 26B, covering the eastern side of the Strait, typically runs from May 1 to June 30. The lobster season in the western side of the Strait, LFA 25, typically runs from August 10 to October 10. The shortest path across the Strait is located in LFA 25. Specific start dates can vary, and can be modified based on adverse weather.

See http://www.dfo-mpo.gc.ca/decisions/index-atl-eng.htm for announcements regarding fishing season dates. In 2011, the seasons were scheduled for April 30 to July 1 (LFA 26), and August 9 to October 10 (LFA 25).