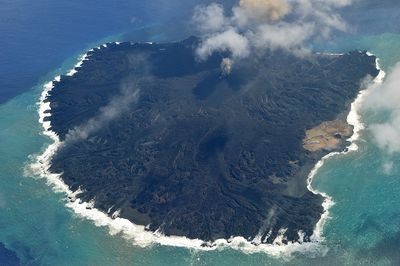 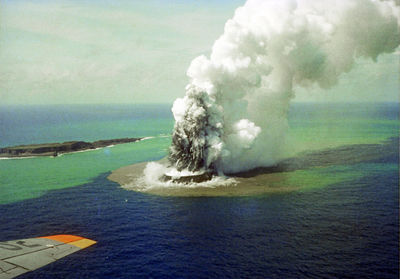 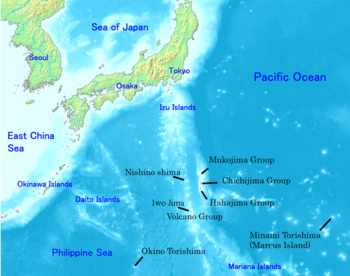 Nishinoshima (or 西之島 in Japanese or Rosario Island) is a volcanic island that is part of the Volcano Islands arc in Japan, located about 1000 km south of Tokyo (東京都小笠原村西之島). The island continues to enlarged after fresh eruptions created a new section of the island that has risen to a maximum height is 38 meters.

TheVolcano Islands (or 火山列島 in Japanese) is a group of three Japanese islands south of the Bonin Islands that belong to the municipality of Ogasawara, south of Tokyo, Japan. The islands are all active volcanoes lying atop an island arc that stretches south to the Marianas.

The Bonin Islands, also known as the Ogasawara Islands or 小笠原群島 in Japanese) are an archipelago of over 30 subtropical and tropical islands, some 1,000 kilometres (620 miles) south of Tokyo, Japan. Bonin Islands is the common name in English for Ogasawara Guntō, from the Japanese word bunin (an archaic reading of 無人 mujin), meaning "no people" or "uninhabited". The only inhabited islands of the group are Chichijima (父島), the seat of the municipal government, and Hahajima (母島) which includes Ogasawara Village.