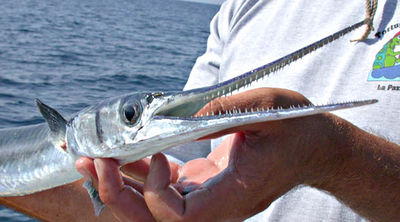 Needlefish (family Belonidae) are piscivorous fishes primarily associated with very shallow marine habitats or the surface of the open sea. Some genera include species found in marine, brackish, and freshwater environments (e.g., Strongylura) while a few genera are confined to freshwater rivers and streams, including Belonion, Potamorrhaphis, and Xenentodon.

Needlefish closely resemble North American freshwater gars (family Lepisosteidae) in being elongate and having long, narrow jaws filled with sharp teeth, and some species of needlefish are referred to as gars or garfish despite being only distantly related to the true gars. In fact the name "garfish" was originally used for the needlefish Belone belone in Europe and only later applied to the North American fishes by European settlers during the 18th century.

Needlefish feed primarily on smaller fishes, which they catch with a sideways sweep of the head. In addition some species will also take plankton, swimming crustaceans, and small cephalopods. Freshwater species are also predatory, with the Asian species at least feeding exclusively on small crustaceans.

Needlefish are most common in the tropics but some inhabit temperate waters as well, particularly during the summer months. Belone belone is a common North Atlantic species that often swims in schools alongside mackerel.

Needlefish, like all ray-finned beloniforms, are capable of making short jumps out of the water at up to 38 miles per hour (61 km/h). Since needlefish swim near the surface, they often leap over the decks of shallow boats rather than going around. This jumping activity is greatly excited by artificial light at night; night fisherman and divers in areas across the Pacific Ocean have been "attacked" by schools of suddenly excited needlefish diving across the water towards the light source at high speed. Their sharp beak is capable of inflicting deep puncture wounds, often breaking off inside the victim in the process. For many traditional Pacific Islander communities, who primarily fish on reefs from low boats, needlefish represent an even greater risk of injury than sharks.

Two historical deaths have been attributed to needlefish. The first was in 1977 when a 10-year-old Hawaiian boy, night fishing with his father at Hanamaulu Bay, Kaua'i, was killed when a 3-to-4-foot-long (0.91 to 1.2 m) needlefish jumped from the water and pierced his eye and brain. The second was a 16-year-old Vietnamese boy, stabbed through the heart by the 6-inch (150 mm) spike of a needlefish in 2007 while night diving for sea cucumbers near Halong Bay. There have been other cases documented in Okinawa.