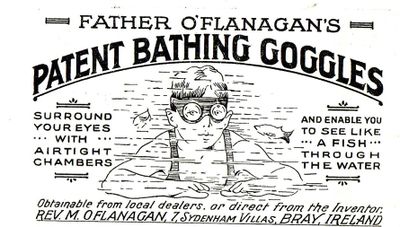 Father Michael O’Flanagan had several patents in his name including for his O'Flanagan goggles. The advertisement appeared in 1928 Catholic Bulletin

Father Michael O’Flanagan (1876-1942) was ordained a Catholic priest in 1900 and prominent patent holder. He was suspended from his duties in 1918-19 for his participation in the Sinn Fein general election campaign, and again from 1925 to 1939. His career took in many of the radical and nationalist causes of the day – he supported the Sligo dockers’ strike in 1913; he preached in favour of the redistribution of land in 1914 and against war taxation in 1916; he was prominently involved in the Roscommon by-election campaign of 1917 and was effectively the head of Sinn Féin in the second half of 1918 (as a priest, he was not arrested along with the rest of the leadership); he was the chaplain of the first Dáil in 1919; he took the anti-treaty side in the civil war and later opposed entry into the Dáil; and perhaps most remarkably, he toured the United States as a supporter of the Republican side in the Spanish civil war.