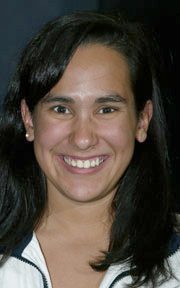 Marlene Pineda was a competitive swimmer at Smith College from New Mexico who tragically passed away in a bicycle accident in 2010. She holds the pool records at Smith’s Dalton Pool for the 1,000- and 1,650-yard freestyle. Pineda graduated from Smith in 2008 with a bachelor’s in education and child study and followed that with a master’s in exercise and sports studies at the Northampton school. She relocated to Boston after receiving her master’s degree and had been the interim head coach of the Cambridge Masters Swim Club and the assistant coach of the Harvard women’s swim team.

Miles For Marly 100x100 is a memorial swim at Harvard University's Blodgett Pool held on 4 January 2015 where swimmers from around New England raise money for the Marly Pineda Scholarship Fund.

The Marly Pineda Seven Sisters Swimming and Diving Award is an honor is given to the swimmer or diver who, over the course of her career at the Seven Sisters Championships, best exemplifies the dedication, passion, selflessness, sportsmanship, and spirit of a champion that defined Marlene Pineda. Each honoree is also known for her positive attitude, commitment toward making everyone around her feel welcomed and supported, and her "never ever" give up spirit.