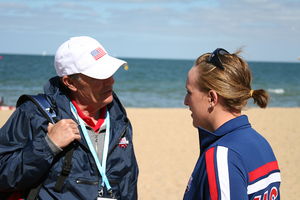 Mark Schubert was the USA Swimming's National Team Head Coach and an 8-time USA Olympic Swim Team coach (1980, 1984, 1988, 1992, 1996, 2000, 2004, 2008). He also served as the head coach for both the University of Southern California men's and women's swim teams and coached at the University of Texas from 1989 to 1992. He was also the head coach of the Mission Viejo Nadadores where his teams won a total of 44 national championship titles over 13 years and the head coach for the Mission Bay Makos in Boca Raton, Florida, where his teams won 9 national team titles. He now coaches at the GoldenWest Swim Club in Huntington Beach, California.

In 1997, he was inducted into the International Swimming Hall of Fame (ISHOF) as an Honor Coach. He was also named one of the 30 Most Influential People in Swimming over the Past 30 Years by USA Swimming and Speedo USA.