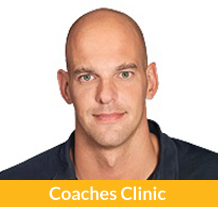 Wouda grew up in Uden, where he joined the 'De Zeester' swimming club at a very young age. His trainers were Martien Swinkels and Rob Kennis, who brought him to the top of Dutch swimming. Wouda made his Olympic debut at the 1992 Olympics, where he was the sole male in the Dutch squad of eight females. He finished 22nd in the 200m individual medley and 19th in the 400m individual medley.

Afterwards he moved to the United States, where he joined University of Michigan in Ann Arbor, Michigan under the guidance of coach Jon Urbanchek, alongside swimmers like Eric Namesnik, Gustavo Borges, and Tom Dolan. At the 1993 European Aquatics Championships, he won the bronze medal in the 400m individual medley. He won the NCAA Championships in the 500 yard and 1650 yard freestyle and an NCAA team title in 1995.

Wouda coached the Dutch junior national swim team between 2002-2006 before being named assistant coach of Verhaeren in Eindhoven, in October 2006. He guided Maarten van der Weijden to his world title in the 2008 FINA World Open Water Swimming Championships and the Olympic title in the Olympic 10K Marathon Swim. He is also the coach of Hinkelien Schreuder who was part of the Dutch winning women's 4 × 100m freestyle relay at the 2008 Beijing Olympics, Linsy Heister, the 10 km European champion and 25 world champion, and Ferry Weertman, the 5 km team pursuit and 10 km European champion.

He is currently the Dutch National Team Coach based out of the National Training Centre in Eindhoven since 2006. He spoke on the Application of Science and Innovation in Day-To-Day Practice at the 2014 FINA World Aquatics Convention in Doha, Qatar.