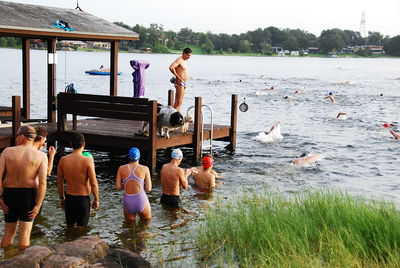 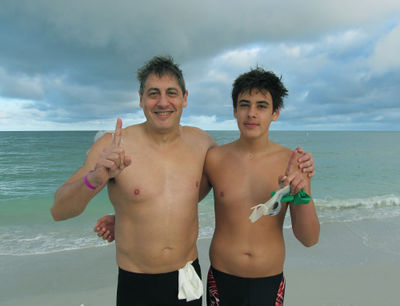 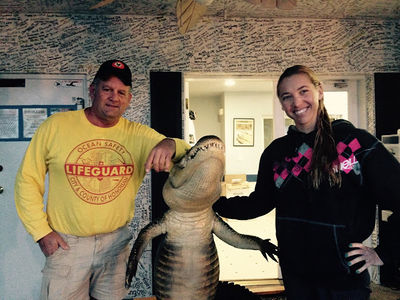 David Heffernan and Kate Coltman at Lucky Meisenheimer's home after a morning swim across Lake Cane in Orlando, Florida where it is traditional for swimmers to sign their name on the walls of his home

Lucky Meisenheimer M.D. (born 1957) is a multi-talented American physician, open water swimmer, event director, aquapreneur, author and actor. His fiction novel, The Immune, is a science fiction thriller with political intrigue, his Guinness world record collection of yo-yos, and his authoritative guide, Lucky's Collectors Guide to 20th Century Yo-Yos can snippets of hints of his eclectic and comprehensive mastery of various topics.

Born John L. Meisenheimer, Jr. at Patrick Air Force Base in Florida, Meisenheimer grew up in Richmond, Kentucky where he attended Model Laboratory School and Eastern Kentucky University (EKU). At age 12, he was the southeastern Junior muzzleloader rifle champion and record holder. He presented his first scientific paper at the Kentucky Academy of Science “Temperature Dependent Learning in Rana catesbeiana larvae at the age 16.

At Eastern Kentucky University, he was Phi Kappa Phi, Mortar Board, Phi Sigma, and a school record holder in swimming and Kentucky Intercollegiate Swimming champion. He also received national publicity and was listed in Ripley’s Believe It or Not for swimming ½-mile with his foot in his mouth. He was an NCAA scholar athlete; the scholarship was used to attend the University of Kentucky College of Medicine which he graduated from in 1983.

Dr. Meisenheimer completed his medical internship at Tucson Medical Center and residency training in dermatology at the Medical University of South Carolina. He has been in a private dermatology and Mohs surgery practice in Orlando, Florida since 1987. He has served as the Chief of the Dermatology Division at Orlando Regional Medical Center since 2003 where he has been an assistant clinical professor since 1988. He resides in Southwest Orlando with his wife Jacquie and three sons John, Jake and Maximus.

Dr. Lucky Meisenheimer walks out of his home to one of the most social, sincerely welcoming open water swimming clubs in the world. Lake Cane in Orlando, Florida has been home to tens of thousands of visitors and local swimmers who swim the famed 1 km circular venue whether they are training for the English Channel or just a way to stay young and fit. Dr. Meisenheimer has created an open water swimming nirvana through his passion for the sport, relentless flow of information, and his own engaging personality. From Olympians and celebrities to octogenarians and newcomers, the personable skin cancer surgeon opens his aquatic paradise to all-comers. For over 3 decades, he has hosted multiple competitions including Lucky’s Lake Swim, an official Historic Event of Central Florida, and created The Lake Cane Restoration Society, a non-profit organization to promote restoration of Florida waterways. Across generations, he has cheerfully inspired many of all ages and walks of life to take up open water swimming and achieve personal challenges. For his creativity of organizing an ideal ambiance for swimming in central Florida, for his hospitality in welcoming a vast number of swimmers to his backyard lake, for continuously promoting open water swimming, Dr. Lucky Meisenheimer is a worthy nominee for the 2017 World Open Water Swimming Man of the Year.

A founding board member of the American Yo-Yo Association, Dr. Meisenheimer continues to serve as chairman of the world records committee. He is known for his book “Lucky’s Collectors Guide to 20th Century Yo-Yos” and his Guinness World Record for the Largest Yo-Yo collection. A copy of "Lucky's Collectors Guide to 20th Century Yo-Yos" is part of the Smithsonian Institution collection.

A life member of the American Swimming Coaches Association, he is a certified level 5 masters coach and was the head coach of Team Orlando Masters at the YMCA Aquatic Center from 1989 until 2000. He was the president of the Masters Aquatics Coaches Association from 1994-95 and served on the ASCA Certification committee.

He is the co-author of the “The Masters School” with Judy Bonning and Micheal Collins. In 1994, he started and continues to coach the Special Olympics swimming program (The Man O’ War Swim Team) at the YMCA Aquatic Center.

A member of the Screen Actors Guild, he has appeared in movies and on television. He made his directorial debut and also wrote the featurette film National Lampoon presents RoboDoc Dissected the Making of the Movie RoboDoc, a parody of behind-the-scenes making of movie, films.