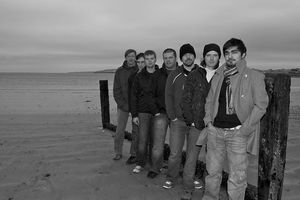 Some members of The Little Minch Team in The Minch

The plan was to leave on Thursday night at 11 pm from Rodel pier, Isle of Harris, swim through the night and on to the next morning, arriving in the Isle of Skye at 8 am, touching Waternish Point head straight back to Harris, arriving in Rodel at 5 pm on Friday . This would be a total of around 30 miles overall.

The attempt was in support of Cancer Research UK. This was the first open water swim the team had attempted and with over half the team coming down with sea sickness on the way over to Skye, it was left to Saul Hindson, Rodney Jamieson and Colin Macleod to carry on with the swimming.

With a force 6 forecast coming in, the decision was made to stop swimming and head back to Harris on the boat. Although the swim failed, the team raised over £6,000 for Cancer Research UK and have vowed to go back and finish the job one day.