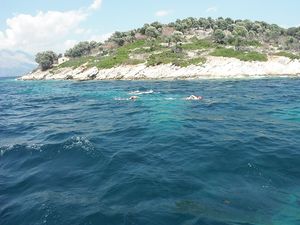 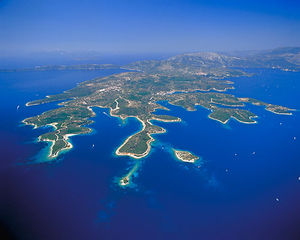 Meganisi on Day 3 of The Big Blue Swim

Dr. Lisa Stansbie (born Birmingham, England 1974) is the co-founder of The Big Blue Swim with Michael Koumbouzis. She has a Ph.D. in 2010 in the Philosophy of Art and has exhibited at numerous galleries internationally. Her film works are often inspired by her love of water and Greece.

The Big Blue Swim is a Greek swimming adventure holiday tour that takes swimmers around the beautiful islands of the Ionian Sea, west of the Greek mainland. The Big Blue Swim will launch at the end of June 2012 and will provide swimming tour in the Ionian Sea, mainly in and around Lefkada and Kefallonia and the hand-like shaped island of Meganisi.

Dr. Stansbie is a member of the Leeds Masters Swimming Club and the British Long Distance Swimming Association and has won national medals in breaststroke at competitions throughout the U.K. She swam the length of Derwentwater in 2011 to win the BLDSA 2-mile event, won a bronze medal at the ASA Midland Open Water Championships and has swum around The Bay of Marathon, Porto Rafti, The Cyclades, Kefallonia and Zakynthos. She is also organiser and team member of the 2012 Etwall Eagles Channel Relay Team.

Dr. Stansbie is currently Head of The Department of Art & Communication at The University of Huddersfield. She is also the joint editor (with Derek Horton) of www.soanyway.org.uk, an experimental online magazine project centred around notions of narrative and storytelling.