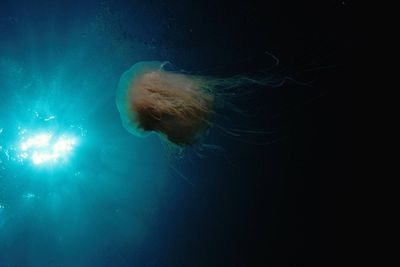 Lion's mane jellyfish near the Irish coast in the North Channel

The lion's mane jellyfish (Cyanea capillata) is the largest known species of jellyfish that are named for their showy, trailing tentacles reminiscent of a lion's mane.

The lion's mane's range is confined to cold waters of the Arctic Ocean, northern Atlantic Ocean, and northern Pacific Ocean, seldom found farther south than 42°N latitude. Similar jellyfish, which may be the same species, are known to inhabit seas near Australia and New Zealand. The largest recorded specimen found, washed up on the shore of Massachusetts Bay in 1870, had a bell (body) with a diameter of 7 feet 6 inches (2.29 m) and tentacles 120 feet (37 m) long.

Although capable of attaining a bell diameter of 2.5 meters (8.2 feet), the Lion's mane jellyfish can greatly vary in size, those found in lower latitudes are much smaller than their far northern counterparts with bells about 50 centimeters (20 inches) in diameter. The tentacles of larger specimens may trail as long as 30 meters (98 feet) or more. These extremely sticky tentacles are grouped into eight clusters, each cluster containing over 100 tentacles, arranged in a series of rows.

At 120 feet (37 meter) in length, the largest known specimen was longer than a blue whale and is generally considered the longest known animal in the world. [NOTE: In 1864, a Bootlace worm was found washed up on a Scottish shore that was 180 feet (55 meter). But because bootlace worms can easily stretch to several times their natural length, it is possible the worm did not actually grow to be that length.]

Size also dictates coloration—larger specimens are a vivid crimson to dark purple while smaller specimens grade to a lighter orange or tan.

A cold water species, Lion's mane jellyfish cannot cope with warmer waters. The jellyfish are pelagic for most of their lives but tend to settle in shallow, sheltered bays towards the end of their one-year lifespan. In the open ocean, lion's mane jellyfish act as floating oases for certain species, such as shrimp, medusafish, butterfish, harvestfish, and juvenile prowfish, providing both a reliable source of food and protection from predators.

Predators of the lion's mane jellyfish include seabirds, larger fish such as Ocean sunfish, other jellyfish species, and sea turtles. The jellyfish themselves feed mostly on zooplankton, small fish, ctenophores, and moon jellies.

Lion's mane jellyfish remain mostly very near the surface at no more than 20 meter depth, their slow pulsations weakly driving them forwards; they depend on ocean currents to travel great distances. The jellyfish are most often spotted during the late summer and autumn, when they have grown to a large size and the currents begin to sweep them closer to shore.

Most encounters cause temporary pain and localized redness. In normal circumstances, and in healthy individuals, their stings are not known to be fatal. However, Professor Tom Doyle has coined the Lion's Mane syndrome: severe pain within 20 minutes or more, weakness, vertigo, nausea, headache and muscle cramps. In very severe stings, there may be difficulty breathing and pain on respiration, tachycardia, muscle spasms, palpitation or chest tightness, stiffness of back and joints, anaphylactoid reactions, and weeping of the skin.